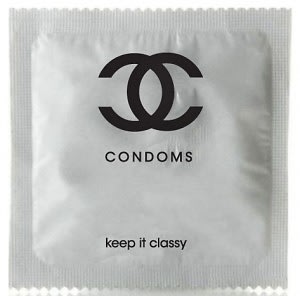 This image has been popping up on Tumblr and Facebook. Is it real? Has the handbag market soured for knock-off manufacturers and this is the new business plan? Would you pay $279 for a pack of three?  We speculate.

We found this pic on Peter Davis' Facebook. Commenters seem unsure of the validity, but the unanimous decision is that these are tres chic:

"Yeah imma need the kinda that come in magnum size .?"

"One way to keep those designer genes to yourself ; )"

Marc Jacob's made condoms so it wouldn't be anything new. Marc's came in a variety of colors along with a hand written note that said "Remember, Safety First! xxoo, Marc Jacobs." One costs just $1.99, far less expensive than what Karl may or have not created. 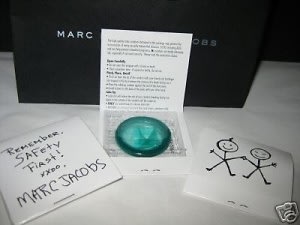 However, it's hard to tell the authenticity of the image. Pictures of Chanel branded condoms circulated earlier in the month with a different tag line. If they were real, it's likely someone on the Internet would have either encountered one or heard about it from a friend who had first hand experience. This is New York after-all, fashion capital of the world. 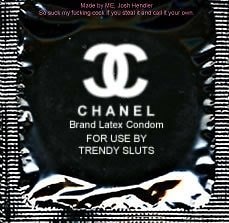 Thoughts? Would you use one?