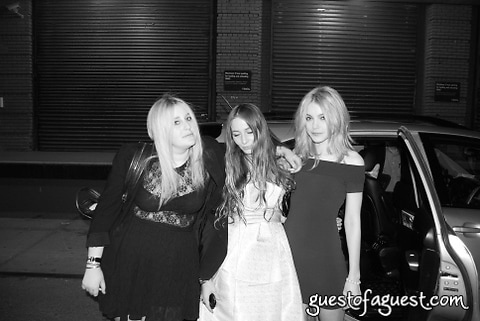 Last night, Eyebeam Atelier (on west 21st) was quite the scene. Women"s Health Magazine teamed up with the Environmental Media Association to create the Generation Environment (gen e) events program: a yearlong series of original events designed to raise awareness about the environment along influential consumers, young Hollywood trendsetters and Women"s Health magazine and online audience. Keith Lissner and I stopped by for a bit and chatted with Abigail Lorick (who"s tunic I happened to be wearing-an old school Lorick design from when she worked at T.S. Dixin).

We also ran into Chloe Sevigny, Zachary Quinto, The Misshapes, Kristian Laliberte, Nell Rebowe, and many others that were mingling among Aveda stations, bars with cocktails served from oranges, and picnic tables, all under giant lanterns; the environment felt cool and refreshing. Supermodel Jessica Stam was DJ, whom Antwan got a chance to know pretty well as he joined her crew at Beatrice Inn afterwards. Here"s what he had to say about the experience...

Everything about lastnight"s event was perfect, from the setting and decor, the host Chloe Sevigny to the dJs and music selections. Not one detail was overlooked. The dJs were so good in fact that I am now sore and in pain from dancing so hard. I honestly did not expect the dJ to be as good as she was because being a supermodel I just expected it to be an iPod playlist. I was wrong.

As the night was coming to a close, I went up to the DJ and her friends and told them how awesome I thought their set was and asked what they would be doing after the show. She told me that they would be going to Beatrice Inn and that I should tag along. So my buddy Terrence Ruggiero and I did just that. Before we headed there I asked them for a snap in front of the hybrid they were driving.. One of her friends blinked. haha. I love it. They drove and Terrance and I took a cab there..

It was my first time at Beatrice and I must say that I enjoyed myself. I danced alot and then walked home afterward. I cannot wait until my next adventure....