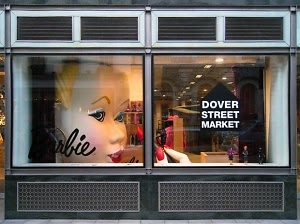 Rei Kawakubo of Comme des Garçons is on the hunt for a good fashion find. The Japanese designer is currently deciding on a site for a New York Dover Street Market to accompany the store's London and Ginza, Tokyo locations, and she'll only settle for a perfect fit.

As Adrian Joffe, her husband and executive partner, told the New York Times,

"The New York DSM will be in an area where there are no other fashion stores so that we can give a totally new identity and hence transform the area."

If anyone can find such an area in New York, its Kawakubo and Joffe.  The duo has a terrific track record when it comes to tracking down potential fashion centers.  They take credit for transforming Soho, where they opened a Comme store in 1983, and London's Chelsea area, where the store moved in 1990.

Still, the brand is taking a risk in opening Dover Street Market's New York Location - the NYT even went so far as describing the decision as

"another shot in the dark - and what a more regular brand might consider retail suicide."

Joffe and Kawakubo, however, are moving forward with their vision, guided by, as Kawakubo described to the NYT, "instinct." She continued by saying:

"I never check out data and make analyses of areas.... I decide about places based on whether I like the feeling of the street, the atmosphere of the area."

The Comme-owned, multibrand Dover Street Market is scheduled to open some time in 2013, but we're hoping the location will be revealed soon so that we can start staking out real estate.