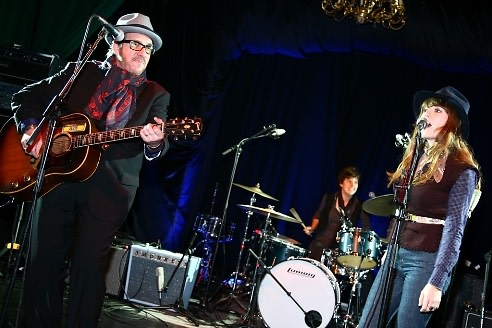 We are big fans of the Sundance Channel here at GofG. Last month we checked out the Iconoclasts launch party and just last week we headed to the Edison Ballroom to check out the launch party for “Spectacle: Elvis Costello With….”, a new series premiering in December that will feature music legends Elvis Costello with just about any musical superstar of now and yesteryear!

At Thursday’s bash Elvis Costello celebrated with surprise performances by singer Rilo Kiley and indie vixen Jenny Lewis in front of a crowd of 500+; Elvis himself joined Jenny onstage for three duets.

If you’re looking for some culture, entertainment or just want to remember the days of when you were a fan of John Mellencamp when he went by John Cougar Mellencamp – you have to check out “Spectacle: Elvis Costello With….” on Sundance starting December 3rd!