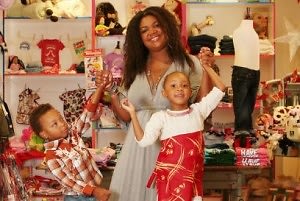 Found in the nook of Ludlow and Stanton, PB & Caviar is a fashion forward boutique that encompasses a mix of both classic and elegant styles, or the caviar, and touch of edgy patterns and bold colors, or the peanut butter. Owned by Evin Cosby, daughter of Bill Cosby, Evin has always had an affinity for fashion, interning for Essence Magazine and helping stylists on the Cosby Show. Her personal style even reflects the essence of PB & Caviar, having an eclectic collection with designers ranging from London to California. Check out what she had to say...

How do you go about picking things for your boutique? Do you go to trade shows? What’s your process?

Yeah, we go to trade shows and sometimes I have people bring in their lookbooks and they show me things I might be interested in. Some things I don’t think would do well and some things I’m like, ‘this is new, I haven’t seen it any where else.’ But most of the time, we do go to trade shows.

Are they international trade shows? local?

What drew you to fashion? You’ve been in the 'business' for quite some time. Why not acting? 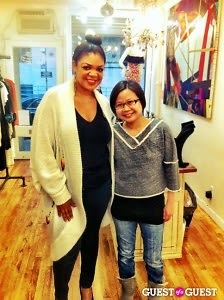 I’ve always been in to fashion, since I was a teenager. I went to Columbia Prep and people always told me that I should do something with fashion. Also, just being around my family, who had friends that were always glamorous and they would dress me up. I was always highly influenced by them. I was always in to fashion. I can remember starting at age 6. I was just like always trying to look like Madonna or something like that. Then it just grew. When I went to college, I went to Spelman in Atlanta for two years. I was never really interested in any of their majors. I decided to go to FIT and that’s where I stayed. I just love fashion. At first, it was to the point where I wanted to be a stylist because I always helped my dad pick out his clothes for his shows back in the day. I would always go backstage and helped the stylists at the Cosby Show. I interned at Essence Magazine in the fashion and beauty department. I worked with Mikki Taylor. I told my parents that I wanted to continue being a stylist and then they were like ‘you don’t want to work for anyone, why don’t you start your own business?’ But I was like, I have no money [laughs]. I was interning and I wasn’t making money. I mean, I was making some, but it wasn’t enough. So they said they would help me financially, until I got on my feet. That’s how I started my own store. And it’s been challenging, but you have to love it. You have to have a lot of patience for it. It’s worth it, but it’s hard. It’s a struggling process, especially when you have all these big chain stores opening and people going to them, waiting outside for hours. I love the boutiques and I hope that we can maintain the boutique atmosphere for a lot of people in the city. 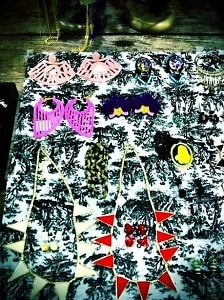 You went to FIT, so why not design?

Well, I am in the midst of coming out with a fashion line for PB & Caviar. I like a lot of edgy stuff, but along with things you can wear day-to-day. Our fashion line, is more glitzy and more fashion forward. I’m working on it. It’s a process--finding a manufacturing company. It’s a whole different level.

Do you have a projected date for when it will come out?

Yeah, It’s still being worked out. Like right now I have a seamstress. So we’re just testing it out and seeing if anyone will like it. It’s also about attracting that costumer that will like it and be interested in the line. So working with the seamstress, he will need to keep on making more and more clothing. If people really love it, then we need to find a manufacturing company.

What designers are inspiring your line? Are you keeping it to just clothing or will you expand to shoes?

Just clothing. I really love... almost every designer [laughs]. I really love Yves Saint Laurent back in the day. I love his mentality, the way he looked at fashion, and how he wanted to change it. I just like when people think outside the box, instead of telling you ‘this is the trend. This is what you have to look like today.” I like designers who are fashion forward. A lot of my designs aren’t what you see in the windows of Gucci, or whatever. That’s their look! Mine is for the individual that wants to look different. I’m not trying to duplicate anyone’s look. I definitely look up to people like Patricia Field. She knows how to take conservative pieces and make them outrageous and fun.

That’s definitely exciting! I look forward to seeing your line. On that note, are you excited/ ready for fashion week?

It’s always crazy and overwhelming! It’s too bad that fashion shows are like 2 minutes long, because I always want to see more and more. I’m gearing up for it though. I went to Tracy Reese’s show a while ago and it’s just a fun experience. I love it. It’s so much fun.

What do you think about digital fashion shows? We’re in a “media age” and there’s some controversy with fashion going digital.

I think it’s great for people who can’t go to the fashion shows. I think designers are artists anyway, so they want everyone to see their work. And if you are the kind of person who loves and dreams fashion, it’s a great way to provide that for people who are not able to go to the shows and see how it is. It’s a new way [laughs]! I’m not a big techie, but whatever can be provided is great. It also shows how hard and challenging it is to be a designer and a model. When I told my dad I wanted to go to FIT, he said I would graduate by folding napkins [laughs]. But it’s actually really really hard and you have a time limit and critics. It’s really challenging. 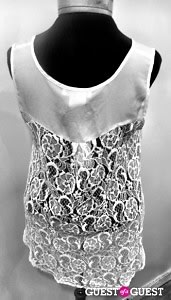 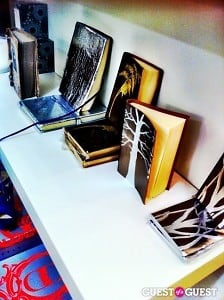 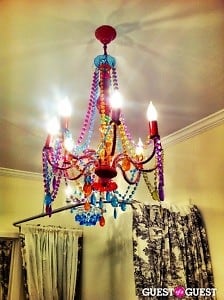 But you've done extremely well, and I'm sure your parents are very proud of you.

Yes, my parents are very proud.

Is there anything they wanted you to do, instead of fashion?

No, no. They were never like that. They never said, 'you need to be a doctor or a lawyer.' I was never raised in a family like that. So whatever I wanted to do... My whole family is in the art world. My sister painting this painting. She's an artist and went to Wesleyan and Berkley. They were always like follow your dreams, but whatever you do learn it and do it well. Education was very important in my family. So as long as you had the credentials and knew how to do it, they were all for whatever you wanted to do with your career. 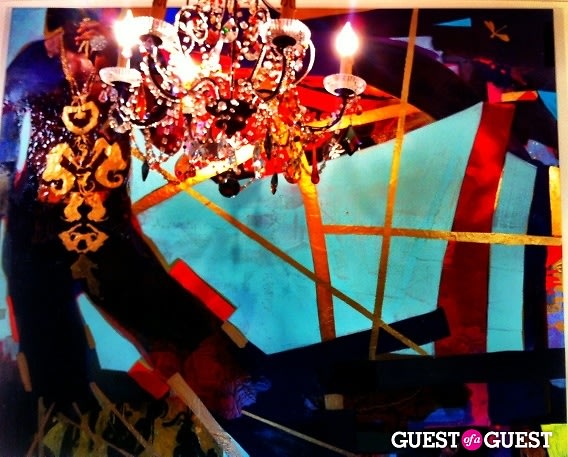 While we're on the subject, what was it like growing up with your dad? Did he go around making those weird noses all the time?

Oh yeah {laughts]! He still does that. I have two children; they're 9 and 7. He plays monster with them [laughs]. It was really fun and we would travel a lot. It's been really fun, going to the shows. Everyone wanted to meet Lisa Bonet. It was a really fun time! You get to travel and meet people, and see what your family has done. I'm the youngest of 5, so it's great being in a big family. It's nice to have that artistic side, and see what your parents do for a living. People always ask 'what's your dad like? Is he funny?' And I'm like 'sometimes.' I mean he is my dad and sometimes he was disciplining. But normally, yeah. He's basically what you see, or what you saw on the Cosby Show.

I read your article in the New York Daily News and you were basically defending yourself for being criticized for having a proper education. Do you find yourself still being scrutinized at times?

Uhh no. I don't really go through that. I haven't gone through that in a long time, ever since I got in to college and left high school. I think people now... there's so much going on with education. The images you see on television... people are very judgmental and you don't want to fit in to that stereotype. I didn't always go to prep school my whole life. I did go to public school when I was living in LA, but I was like 6 years old. You just have to feel confident. Spelman College was a black institute and I loved it. I still support it. For me, they didn't have a strong arts department. If they did, I would have stayed there. But I don't know what young black kids in prep school are going through nowadays. I'm 35 [laughs]. When people come from money there's always insecurities. They want to fit in. You just need to be happy with what your parents have provided for you and the options that you have. Get the education you need to get. I don't believe in talking white or sounding white, because there are people who are inarticulate. There are so many kinds of ethnic groups. I don't talk a certain way. I'm just an educated person. And you can tell who has been educated and who has not been. 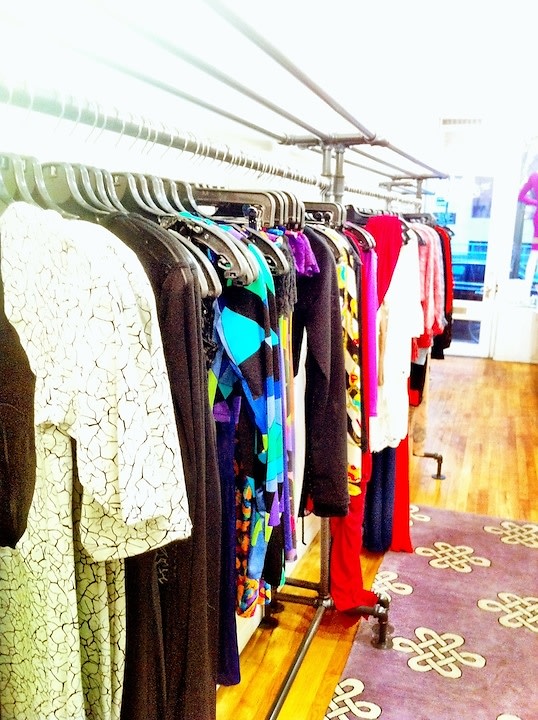 Where did you get the name from?

I was watching the style network actually [laughs]. There was a program called 'PB & J' then I thought about 'The Dressing Room'  but that was taken already. I was going through all of these different names and then PB & Caviar just popped in to my head. So I called my attorney to see if PB & Caviar was taken and they were like 'uhh no' [laughs]. I just love it! I think it's different. I was thinking of stores like intermix, where the store names made sense for their company. I was thinking about mixing names with clothing.

What's one staple piece in your closet you can't live without?

[laughs] My shoes! I love my shoes. I have these shoes by Christian Louboutin. My friends know exactly which one's I'm talking about. They're hot pink with glitter. I wear them all the time [laughs]. I was going to wear them today but it's raining! Clothing-wise, I have this little vintage piece I got in Paris a few years ago. They're like shorts. It's a jumper and it's pink. I don't even know who the designer is [laughs]. My friends are like 'you can find something else' [laughs].

Do you have any advice for future designers and female entrepreneurs?

Just keep on going to different boutiques like myself. It's really really hard. I see how a lot of designers are starving and they really want to get their line out there. Sometimes we have designers on consignment because we just believe in their line, but we also want to make sure that their work sells. For designers that want to start their own business, study the neighborhood first. Narrow down what kind of customer you want to attract. People can come in and ask for pant suits and that something I just don't believe in. Like when I was in Tribeca, I had a lot of people that were attorney's and they wanted pant suits and I don't do pant suits. I do a lot of fun, colorful things you can't wear to work. Make sure you know how to target your group. Also, start small. I started off too big, but then I cut it down. So start small and slowly build with new things to keep your customers interested. And don't price your things to high.