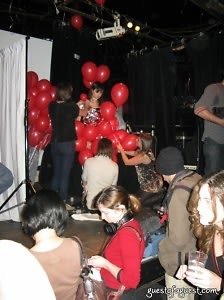 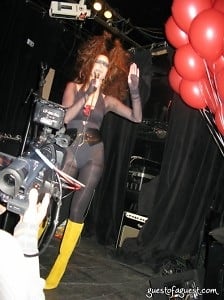 A Fashion Contest?  A Secret Location?  One hour for a design team to construct a dress out of a surprise material?  We were intrigued.  And we, along with the folks at RACKED, were curious enough to stop by the LVHRD ("Live Hard")'s Fifth Annual Fashion Duel in Williamsburg.  When we found out the theme this year was to Nena's song "99 Luftballoons" we were besides ourselves (love that song!).

So the two teams, (one was "Love Brigade" and the other "Hannah Shaw"), were given 99 red balloons and instructed to make a dress that would bring about the end of the world.  Read the full rules below.

"In 1983, Nena, a one-hit-wonder songstress, captured the hearts of the world with her cold war-era portest song '99 Luftballoons'.  According to the song, 99 balloons float into the sky one fateful day and are mistaken for war crafts, thus triggering an apocalyptic overreaction by military forces.

We are here today, Monday November 24, 2008, dealing with a global financial crisis, the constant threat of nuclear war and a few more weeks with George W. Bush at the helm.  Some might say the end is near.

Design the dress that ends the world.  We've given you the 99 red balloons you need to realize the end Nena portended.

You have one hour to dress your model using only the balloons we've provided you with...if you need more you may appeal to the audience.  Also, your model must be able to walk freely without her outfit falling apart.  We'll decide which team gets to select their model first with a good old-fashion blow to pop contest.