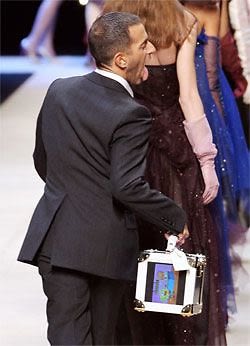 At least that's what it looks like in this picture. He looks like he is on the way to the cafeteria with his lunch box packed by his mommy. Poor Marc. His love life is always on the rocks, his recent line last month got horrible reviews, and all the hip residents of the West Village want to kill him. (can you blame them?) It's all just too much for the designer to take. Many individuals, when placed under severe stress or frustration, have been known to revert back to child-like behaviors (coined "regression" by Sigmund Freud). This may be the only explanation for Mr. Jacob's behavior at the recent Louis Vuitton show in Paris. Marc Jacobs is of course the designer for the label, and today, the Washington Post reported on the above pictured "tongue wagging" that took place at the show. Apparently it was meant for his enemy Suzy Menkes of the International Herald Tribune who publicly expressed her irritation with the tardiness of the Marc Jacobs NY fashion show last month (which was over two hours late). The LV Paris show was over an hour late and it seems that he not only did NOT learn his lesson, but perhaps did it just to spite the very people that were attending. Jezebel thinks Marc Jacobs needs a time-out. We think he is due for a big spanking followed by a long nap.