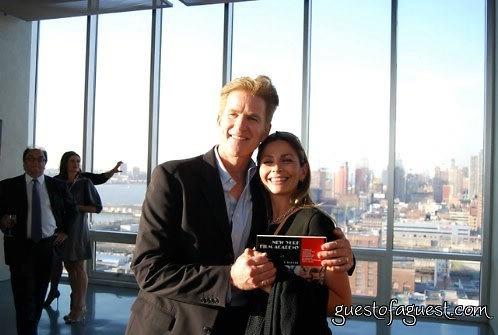 Actors, Models, Socials, philanthropists, designers and even NY Housewives (a la Bravo's reality TV series) rolled up to the Green Carpet Entrance (some in PEDI-CABS) to the Chelsea Art Museum to celebrate the launch of Tumi's Alpha line while supporting Matthew Modine's Bicycle for a Day Charity (BFAD). Photographs were on display to buy via silent auction of a ReForestation project in California (some of the pics were taken with my favorite - the pinhole camera). Also available were the super cool and fun BFAD "dog tags". For a small donation of $20 I was wearing one around my neck and loving it.

The party was ablaze in the GlassHouse on the 21st floor of the museum. Guests enjoyed Chopin CEO Martinis, Chopin Ginger Pear and Mule Cocktails and Ruinart champagne. The view was amazing, everyone was mixing, mingling and laughing, and preparing ourselves for Sept 20th's B-Day, as in BIKE FOR A DAY. The goal is to get 100,000 people to use bikes instead of taxis, subways, buses, and passenger vehicles. Sounds fun to me!