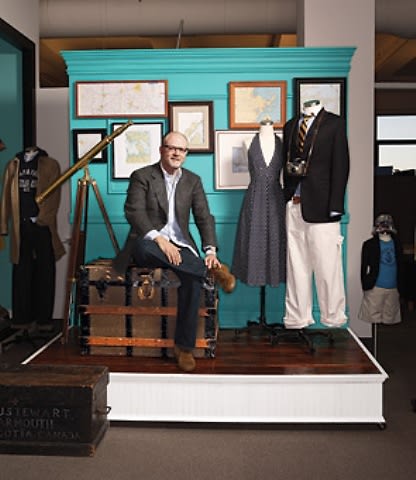 Set to actually open TOMORROW, Mr. Mickey Drexler (in photo above) surprised us all once again. The former CEO of the Gap took over JCrew in 2003 and the company has never looked back. His quirky, yet "I mean business" attitude is what keeps his 550+ employees of his New York office on his team at their Soho offices where he uses an old fashioned p.a. system to get messages across. No one knows what the guy will do next. Having met Drexler ourselves, we walked away from him thinking "We want some of whatever juice he's drinking", his charisma was so radiant. Whatever the juice, it seems to be working for the guy who just completed yet another purchase of a house out east (he owns several), once belonging to Warhol. It is set to be a very merry holiday season for Drexler who, by paying attention to the details in EVERY SINGLE part of the company, has made JCrew into one of the most valuable retail companies in the world

It is their holiday version of the real store that is set to open up later on across the street and from what we have seen (and heard) from our insiders is that it is going to be a great stop for your hard to find for xmas gifts. Check out more of the collection at www.madewell1937.com.