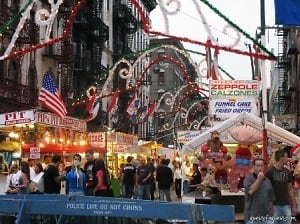 The Feast of San Gennaro swallows Mulberry Street starting tomorrow. Neighbors in Nolita, made up in 1996, are less upset about the event, started in 1926, than last year. Maybe because a new vendor, Torrisi, will acknowledge the Chinatown takeover of Little Italy. Happily, the reminder comes in the form of "wok-fried mozzarella sticks."

This unlikely detente between yuppie Nolita and what's left of immigrant Little Italy would have been a nice development on its own. But throwing a bone to Chinatown, which decimated nearly all of Little Italy save for a gaudy, but kinda fun, stretch of Mulberry Street? You've got to wonder what Gennaro, the patron saint of volcanic eruptions, would think of the turf wars at this downtown jumble of micro-neighborhoods going dormant.

Anti-Gennaro sentiment reached a fever pitch in recent years, with rumors of the festival's death circling in 2007. As Curbed pointed out, the uproar seems to have subsided following some neighborly triage from Feast organizers. Anyway, the anger was silly and misplaced considering the relative newcomers that complained about the old school festival were viewed with suspicion by the Little Italy veterans they displaced.

Joyce Cohen wrote about Nolita in the Times real estate section in 1997, at once cautioning against and ensuring its complete gentrification:

"In the past few years, extremely upwardly mobile young men and women have moved into the neighborhood and put a brand on it that is not ethnic and not monolithically religious in nature. 'Now the hallmark is that they're affluent,' said [old-timer Michael] Pitts. 'My concern is that they're changing the character from a family neighborhood to the Mulberry Street mall."

Good thing Rich Torrisi and Mario Carbone are around. The guys opened Torrisi, a humble deli by day and gourmet magic carpet ride by night, on Mulberry last year and will elevate this street fair's food above the usual sausage and peppers. Forget that most of their ingredients come from Chinatown. What better way to bring feuding neighbors together (and avoid a Gennaro-set, Godfather Part II-style murder) than mozzarella sticks, roast pork sandwiches and "cream puffs engineered to taste like custard buns?"