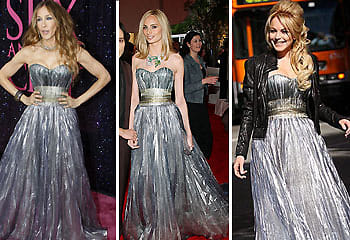 You may have caught the Sunday Styles piece on Sarah Jessica Parker's "recycled" dress for the New York Sex & The City premiere. After being reassured by Olivier Theyskens that her dress had never been worn before, it was discovered that the dress had in fact been worn by the lovely socialite and Vogue editor Lauren Santo Domingo on May 5th when she walked down the carpet with Theyskens at the Met Gala in NYC.

Mario Grauso, president of Puig's fashion division, tried to defend their lack of disclosure by saying that Lauren Santo Domingo was not a "celebrity", and, therefore, her wearing of it was immaterial. Hmmm...sure socialites are not celebrities, but their pictures are so readily available on the internet, that you might as well treat them all as one lot. But I digress...adding salt to Parker's wounds, and scuttling Grauso's defense is the recent discovery by the Daily Telegraph that La Lohan ALSO wore the dress!

But that wasn't the actual point of this post. The alleged unethical behavior on behalf of Theyskens and Grauso is of course one thing, which if true, makes it easy to understand the frustration of Parker.

“but what they did was so short-sighted. It’s just unethical and disappointing that they would allow the dress to be worn again.”

But what she finds disappointing for one reason, I find disappointing for another. What has become of an industry where a dress is only good if it hasn't been worn before? Why is this a problem? Exclusivity has clearly trumped common sense. Wearing the same dress as someone else (on a different occasion of course), should speak to its well designed nature. It shouldn't be used to compare those whose shoulders it has draped, especially since no one person will wear it the same as others.