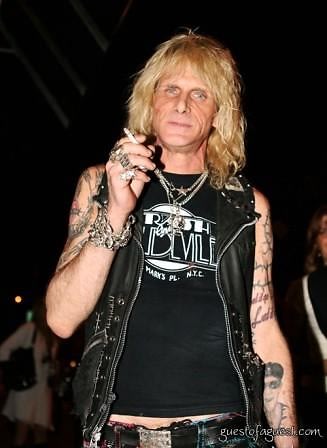 Last night's Morrison Hotel Gallery soiree featuring Bob Gruen's classic, insider rock images from the heyday of punk was more Clash and Sex Pistols than chic and socialite, which is just the way we like it. The scene was a classic New York cross-section of wide-eyed, nubile young things and established, older rockers. In fact, some were even surprisingly well-preserved (Debbie Harry must eat the hearts of small children to look so good at 63). Bernadette Peters swooped in and ravaged the crowd with her trademark crimson tendrils while Dick Manitoba of the Dictators saw fit to grace us with his cooler-than-thou smile.

To balance out the age range and the wildly diverse, um, beauty spectrum, model Lily Cole showed up along with some members of the New York Dolls who wore a decade of excess on their face. But, as Gruen's photographs showed us, Keith Richards made looking like a wrinkled brown paper bag kinda cool over 20 years ago (as long as you're next to Mick "I Bathe In Sex Appeal" Jagger). Along with classic industry veterans like Patti Smith's guitarist Lenny Kaye, the younger generation showed its support via ambassador of cool (and Sienna Miller ex) Jamie from Bloody Social.

Throughout the night, a few trends emerged: If you looked young enough to know less than 25% of Gruen's photographed bands, then you spent way more time staring at the steadily-arriving tide of seasoned punk rockers than their photos. If you were feigning disinterest at the boldface names like an over-qualified Starbucks Barista, then you spent most of your time angling to get in their photos, which were being snapped like strobe lights at a Ramones concert. If you were one of those coveted musicians for whom Gruen would drop his book-signing pen and give you a hug, then you spent most of your time corralling your young, gay entourage into obedience (Debbie Harry must own an orphanage for burgeoning groupies somewhere).

The rest of us ogled the stunning images of Gruen's subjects, some remarkably candid, others posed like alcohol-fueled mannequins with a dangerously chaffing penchant for leather pants. All were fantastic and offered a completely fresh take on the punk and rock icons we think we know so well. Even if you're not a David Bowie devotee, the show is a must-see for anyone who wants to be culturally literate in the ways of music. To further your sonic education, Gruen will be showing his images until June 24th. Check them out at Morrison Hotel Gallery and you'll get a bonus look at the now-Varvatosized CBGB's next door at 315 Bowery. We'll definitely be back.