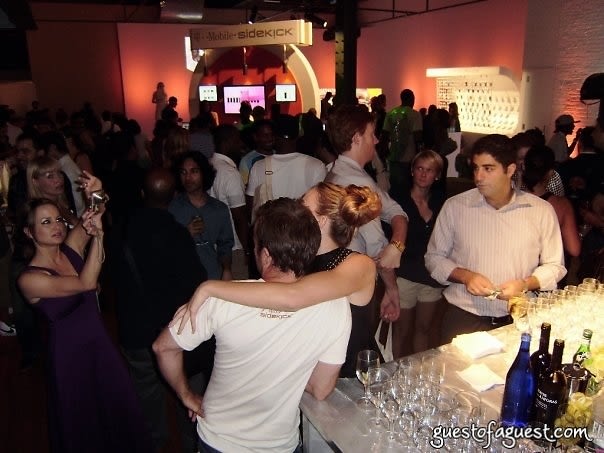 Go HERE for more photos, and TAG YOURSELF and your Friends in the Gallery!

Wow it's been almost a week! Did you miss us?! So here's our night:

We started our night at the T-Mobile Sidekick party at Bathhouse Studio. Our host Jackson Jeyanayagam (from Waggener Edstrom) told us to get there early because he has some surprises in store. Did he ever! The party was a total interactive, visual experience. We couldn't even focus there was so much going on! There were bars everywhere and not just alcohol, there was also an ice cream shake bar, a peanut butter bar and an icee bar where you could pick your favorite flavor.

They had a green screen set up where you could jump in while backgrounds appeared behind you. You could custom make a T-shirt, get a makeover, interact with the live statues or watch murals as they were created.

We were given new Sidekicks and as if that weren't enough, we were then lead to a computer terminal and Marianna Wickman of T-Mobile led us through the steps to create our own personalized shell. The shells fit your sidekick and you can change them as often as you like and can customize with any picture you have on your computer. We used our GofG profile pic and when we get the shell, we will share with you. Besides free Sidekicks, we also got a Mini Munny from kid robot, jewelry from San Damian and customized skateboards! We put all the swag in the T-mobile bags provided by Eco Choice. Others enjoying the party included Herbert Hill of the Philadelphia 76ers, Nic from America's Next Top Model, Rapper Kid Cudi, Allure's Ro Penuliar and Marc Jacobs' new favorite designing duo, Dee and Ricky of Twin Dee.

We hated to go, but had dinner reservations at Sushi Samba. After a rocky start with a manager with a major attitude we were lead to our table. We were joined by Adam Schmidt of Evisu and Naeem's other boss Matthew Levine. We obviously talked a lot about the new Eldridge and the imminent opening but that's about all we're going to say.

We hate to be negative but after spending almost $600 on a meal, don't you think you can park at a table for a few minutes without getting kicked out? A manager came over three times in 15 minutes to thank us for coming before asking us if he could give us a shot on the house at the bar! The kicker? We don't get to pick the shot, it's the "house" shot. We opted to leave instead, knowing Sushi Samba on 7th was off our list. To tell the truth, it's Restaurant Week in New York and it was the only place we could get in on such short notice--we wonder why?

We promised Jasen Kaplan that we would stop by Barracuda for his weekly Karaoke party. We were joined by Macy's Christina Madry and after a ten minute struggle to get a cab we headed to the Chelsea Lounge. We were greeted at the door by Jasen, served alcohol by the gorgeous Scott Jones and hung with Tim Garcia and Jason Stalvey. We were told that Aubrey O'day of Dannity Kane was making an appearance but had to jet to our next stop before she got there. Pity, we hear karaoke is her specialty! We kid, we kid!

Our friend and Big Brother alum Beau Beasley was holding court at Delicatessen and was hosted by the owner of Delicatessen and Cafeteria, Matt. We hadn't been since the opening so were curious to see it under normal circumstances. The space is great, with the signature garage doors, and includes a downstairs lounge. Everyone seemed pleased with their food and we can vouch for the drinks! We met Jonathan Hettinger, CEO of Nextwave, who told us about his new venture in New York City. We will be breaking that story in the fall, and believe us, it's a big one.

Before leaving Deli, we were joined by another Big Brother alum, Janelle Pierzina. We loved her on Big Brother and really wanted her to tear the "Friendship" apart! Alas, she lost but won in our hearts. Our group then headed over to the weekly party at Bowery Bar, Beige. We hadn't been there in literally years. We met up with yet another Big Brother alum, Wil Wikle, who went from skinny boy to buff stud! Beige was everything that we remembered, so we left.

Our final stop, you guessed it, was 1OAK. After snogging Sherry Cosovic and Binn Jakupi at the door we headed inside for a little nightcap. We were thrilled to see our favorite french supermodel eve salvail and probably talked her ear off. We really can't get over the fact that 1) she talks to us and 2) how totally stunning she is. We chatted, probably slurred, with our boys Allan Singman, Arthur Boujenah, Constantine Maroulis, and Jay Galvin and decided to say adios. Another great night....