It's Marathon Sunday, which means it's going to be impossible to get around the city, which means you might as well join the chaos and participate as a spectator in the New York City Marathon. Click below to find out who to cheer, where to watch, and where to carb-load.

Race Jargon (So You Know What People Are Talking About) 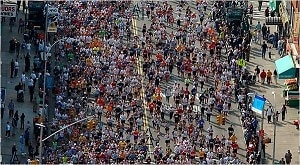 Lead Pack: The group of Elite Runners who run ahead of age group participants.

Pace Group: a group of runners who are running to finish in a certain time. Pacers literally run with signs that say "3:30" or "4:15" to keep runners on pace.

Fartlek: the Swedish word for "speed play". Speed up, slow down, speed up, slow down - that's fartlek training. It puts the heart rate at about 60-80% below max and is meant to offer continual exercise without major stress or discomfort. It's especially helpful for runners who know their desired pace and tempo and want to speed up without measured intervals. --By Cary Randolph

Who To Cheer On:

Techies: Caroline McCarthy, Foursquare's Naveen Selvadurai and Dennis Crowley (who's running for Camp Interactive, and tracking his race on Runkeeper.)

Where To Cheer The Runners: 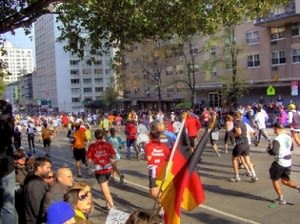 They'll be specially set up computers here so you can check on a runner's progress.

Entertainment and giveaways by ING, as well as a jumbotron showing messages and photos family and friends 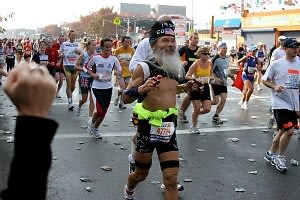 Where To Eat Along The Way, Because You Might As Well Carb-Load, Even If You Aren't Running.

Where To Go: Pegasus Diner

What To Eat:  Waffles!

Where To Go: Palo Santo

What To Eat: The Brunch comes with sangria, but if you want something a la carte, get the Duck Hash and eggs.

Where To Go: Marlow & Sons

What To Eat: Scone with Devonshire Cream.

Where To Go: Peter Pan Bakery

What To Eat: Red Velvet Donuts.

Where To Go: Sage General Store

What To Eat: Bacon Pizza as part of their bacon brunch.

Where To Go: The Coffee Inn

What To Eat: Grab a coffee and croissant to go, and cheer on the runners as they head to The Bronx.

Where To Go: Sisters Caribbean Cuisine

And for people who actually RAN the race:

Macelleria, on 38 Gansevoort, is offering unlimited pasta servings for the price of one to all runners who show their bib number.

Millenium Hilton is offering a special pasta prix-fixe for runners on November 6th, and 20% off brunch on the 8th.

AND DON'T FORGET TO SET BACK YOUR CLOCKS ON SATURDAY NIGHT!