Last night, I went to a party at the Central Park Zoo called the Ultimate Summertime Party. The News Corp hosted the party, which raised over $95,000 for the National MS Society. Our hosts -- who own Fox News and Wall Street Journal -- requested that we dress in "summertime attire," but somehow CEO Rupert Murdoch forgot to make sure it didn't rain. Thus several hundred or so partygoers and I manned up and brought our umbrellas to the bash. Being that we were at a zoo, I went around and asked people what their spirit animal was, which, for those unfamiliar with the concept, is the particular non-human creative you would be if you were reincarnated as such. One that represents your personality and stuff.

Reason: "Because you're not stuck in a box... you get a little bit of both." Catherine was first introduced to ligers in the critically acclaimed film Napoleon Dynamite, although she had to confirm the existence of ligers through some outside research of her own. "They're real!" she told me. "There's some in Florida."

Spirit Animals: Both are birds

Reason: When asked to specify what particular avian being they embodied, Natalie express her desire to be a "pretty flying bird," and then specified that she'd like to be a seagull. Seagulls are truly beautiful creatures. Ali didn't care what bird she was, as long as she resided somewhere that was "not by an airport."

Reason: "They sleep a lot and eat leaves." She's a lazy vegetarian! 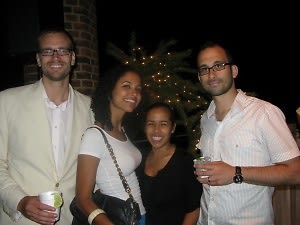 Reasons: Seth hails from Alaska, the state that gave us Sarah Palin, so he's sort of a polar bear himself. Maria briefly considered that she might be a bird, but after I told her that two girls had already chosen that route, she settled on a phoenix. Melissa, on the other hand, spared no time in her declaration of penguinhood. Lastly, Andy chose to be a wolverine because he wanted to rip Maria up and thought that if you were going up against a phoenix you'd probably need something with really sharp claws.