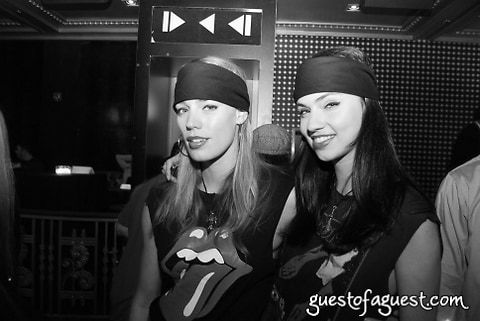 Note from GofG: So our little tag team duo (the ones who claim that Hellen Kellar would have a better iTunes playlist than me), Antwan and Honor hit up the T-mobile event last night at the Edison Ballroom. Read Antwan's account below where we find out oh so many things about the guy: including that he has a surprisingly limited grasp on the written slang, loves breakfast food, and is on a hard core diet:

T-Mobile's newest MP3 phone launch at the Edison Ballroom was a stellar event. The space was beautiful and the people were as well. The dJs were on point and really had the crowd moving playing/mixing old school tunes with new age hits. Kid Cudi performed and got the crowd "amp'd" and that was fun. (I'm bad at slang, I know)

The place got packed right around the time I got there with my friend Honor. Oh man! I almost forgot to mention that they were serving full on breakfast at this event! HaHa. I'm dead ass! They had a waffle station with all the fixin's and chef's upstairs were making people personalized omelettes. The servers were walking around the party with these bacon only sliders as well as the traditional sliders and also more waffles.

Being a breakfast lover this was a dream come true, but being on a diet made it hell. The open bar was awesome not only because it was open, but really because the bartenders were so nice to everyone. I ran into a few friends that are on staff over at COMPLEX magazine and we hung out a little and had some good laughs. All in all this party was a huge success I would say and I tip my hat to Jackson Jeyanayagam of Waggener Edstrom for making this phone launch event as awesome as it was.