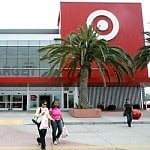 I have no idea how I missed this.  Considering Target is one of the reasons I almost didn't move to Manhattan (it was quite a sad day when I found out that the city in which I would be able to "get anything in the world" was actually the city where I could get "almost anything in the world").  I can't even tell you the number of times I have been forced to go to Jersey to "fix" my Target addiction. Some of my favorite pieces I own have been found at Tar-geh...which is why I am estatic to hear that the store plans on opening four "pop-up" stores in Manhattan.

These "Bullseye Bodegas" will open on Sept. 11th in midtown, Union Square, Soho, and the East Village, and will only be able to house the most important items, saving me the sifting through time I usually have to spend.  Now, maybe my sister will actually start visiting me more often, because if there's one thing that will steal her heart, it's a well-stocked Target....let's hope the masses dont attack these stores too soon.

[Plum TV-Doug calling out my outfit as a Target buy]