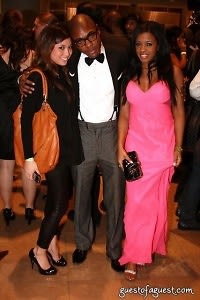 Go HERE for more photos by JERRITT CLARK and TAG YOURSELF and YOUR FRIENDS!

Nexxstep Visonary LLC along with invited guests brought in over $25,000 worth of unwrapped gifts from companies including MOMA, American Doll Company, Build-A-Bear, and Mattel, to name a few, for the US Marines' TOYS FOR TOTS charity foundation so that some children can look forward to a merrier Christmas.

From the press release:

The dancers of Dance Times Square, owned by world dance champion and choreographer Melanie Lapatin of So You Think You Can Dance, demonstrated dance numbers from the tango, salsa, to the swing on the dance floor while DJ L of Bet's 106 & Park took care of the atmosphere.  Guests were treated to an array of unique, unexpected combinations of mouth-watering appetizers from chicken satay with a mango pineapple dipping sauce to Armenian mozzarella balls served with asparagus, tuna tar tar on top of a sesame cracker, caviar served over top of a baked potato drizzled in a shot of vodka courtesy of The Orgasmic Chef, who was honored by Mayor Bloomberg earlier that day for the launch of their very own television network.

During the event, notable artist and founder of Notism, Ron Burkhardt, offered a private sale for his one-of-a-kind artworks, including his historic "Giants Super bowl" piece featuring news clippings and images from the New York Giants' unexpected victory against the New England Patriots. In addition to that, luxurious evening gowns from Tiffany Koury's Spring 2009 collection, valued at $8,000 - $55,000 which was sported on socialite, Elizabeth Grimaldi and viewable on flat screens throughout the venue for guests to preview.

The Fashion Reporter shared that "while closing out 2008 and entering 2009" they intend to improve lives as they celebrate all things fabulous and cutting edge, giving more hope and aspiration to our children of the future, especially in such hard economic times", shares Priscilla Monteiro, Publisher, The Fashion Reporter.