Every August, thousands of people can't wait to get their hands on the September issue of Vogue. This issue impacts the $300-billion global fashion industry more than any other single publication, and one film hopes to document the making of the September Issue from the inside out. Following editor-in-chief Anna Wintour and her team of editors as they work to create the "must-have Bible of fashion,' the documentary takes it's viewers behind the scenes at Fashion Week, Europe, and shoots as well as closed-door staff meetings. It's first official screening, outside of Sundance, was last night at the MoMA.

BONUS: There were a couple of our friends that decided to keep us updated via the Twitters:

@alexa_chung (Alexa Chung) thought the film was "Rad" and 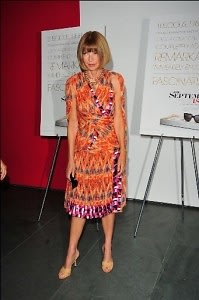 [Photos by CHANCE YEH for PMc].