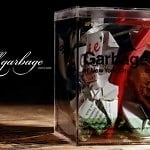 Wow. Hawking things to tourists in New York has always been something of a slam dunk, what with the streaming hordes of Midwestern wide-eyed visitors. But now, it's like selling sand at the beach. The latest creative scam venture: Selling New York garbage back to New Yorkers (and its tourists) under the guise of commemorating history. Yay, hermetically sealed refuse that reminds me how hospitable our city is to vermin and disease! I'm already on the waiting list.

The name of the [scam] "artist" is Justin Gignac and his contribution to the art world is his ability to "carefully arrange plastic cubes full of the [garbage-y] stuff." Our Mr. G. also touts, "no leakage and no smell", which sounds more like a personal ad in the back of the Village Voice than a call for high art. Lest we fail to feel compelled to break out our wallets, we reminded of the need to own "a piece of the NYC landscape...before they clean up this city." Good point. I know the minute they start adding more garbage cans to the corners of heavily trafficked intersections and sweeping the streets, I'm bolting for Vancouver. If I can't shine with the righteous knowledge that I live in an "authentic" urban shithole, then I will be forced to leave. Bonus: Gignac's now got special edition garbage/treasure from the final days of Yankee Stadium and the Republican National Convention. Both of which I've been trying to will out of existence, not pay money to commemorate.