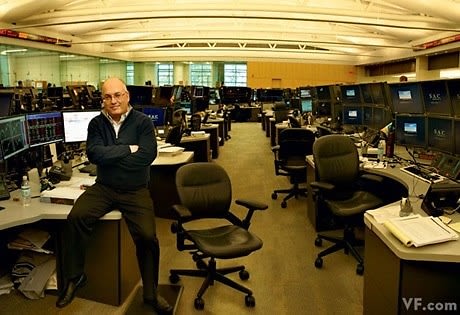 This just in: Apparently even billionaires have pest control problems, or so one might surmise from the flock of wild birds terrorizing the SAC trading floor yesterday. Steven Cohen's $14 billion hedge fund in Stamford closed early on Wednesday, so that the 15+ birds which somehow found their way into SAC's high security, modern art filled headquarters could be caught and released.

The hedge fund tycoon (who's estimated net worth is $9.3 billion) has an on-going investigation for criminal insider trading, one of the most famous modern art habits in America, and a serious need for a good exterminator. Sources say the avian influx announced itself yesterday, and despite the early closing, many of the birds are still at large today.

Time is of the essence for Cohen, as the Feds must indict him by mid-July or let the titan (regarded as the most successful stock trader of our era) go to enjoy his new $60 million oceanfront house in the Hamptons. With each passing day, the pressure is escalating for Cohen, and it looks like a few wild birds on the trading floor aren't going to ruffle his feathers. The birds are said to still be flocking around the trading floor, but that's all in a days work for the hedge fund raven.