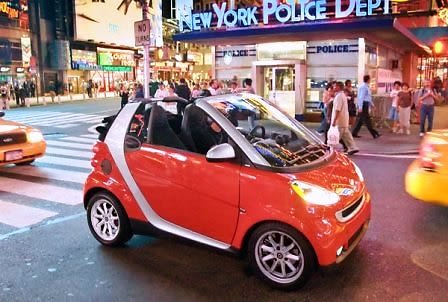 Everytime we go to a big European city such as Rome, we wonder when American metropolitan areas will start being "smart" and catch on to the smaller forms of transportation.  Sure there are a handful of Vespas that may be spotted here and there from time to time in the village, but it certaintly isn't mainstream yet.  Perhaps it's the weather, or the fast paced street traffic that halts people's purchases of that powder blue two wheeler... this year, a compromise will arise in the form of the Smartcar.  Created by the saavy Mercedes-Benz, the Smartcar is a member of the Penske autogroup and has already taken Paris, Rome, Barcelona, and London by storm.  Upon placing your order for the car that runs around $15,000 you have the ability to choose your own color and style.  The cars are only 8.8' long but can run up to a hefty speed of 90mph.  Already 30,000 people have paid the $99 reservation fee in New York City alone to assure they will score a Smartcar this January. With dealerships sprouting up all over the country, expect 2008 to be the year of the Smartcar.  We will be anxious to see if this is just another "fad" like the Beetle, or if this car is smart enough to stick around.