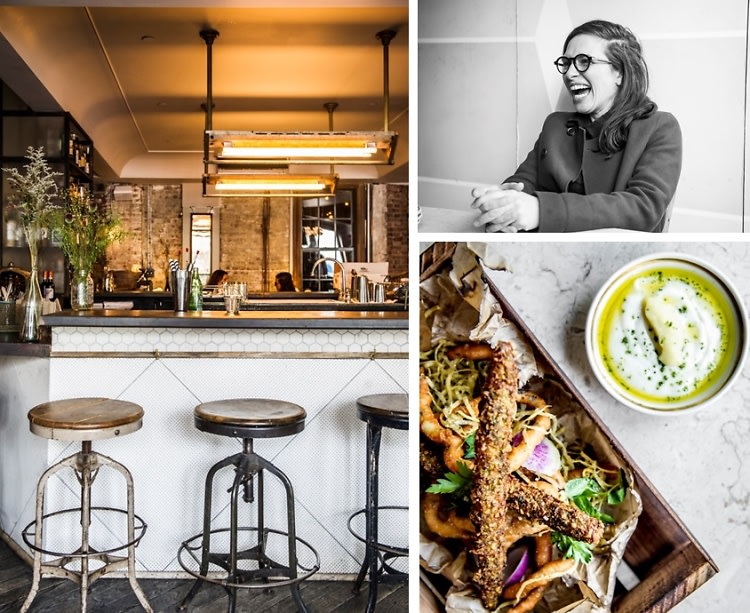 Owner of Glasserie, the ‘Levantine-leaning’ restaurant in Greenpoint, Sara Conklin grew up with food on the brain. "I've always been an eater," She tells us. Growing up in Saudi Arabia, Kuwait, Abu Dhabi and Dubai, Conklin absorbed the roots of a cuisine that has been long overlooked in the States. "Middle Eastern food is extremely underrepresented here," Sara tells us. "I wanted to create a place that displays Middle Eastern food in a memorable way." With a background in events planning, Sara scooped up the ex-glass factory in 2013, buried on an unremarkable road beside the Pulaski Bridge. Since launching, Glasserie has enjoyed rave critical reviews, hordes of loyal customers and a daily onslaught of visitors from across the bridge and beyond.

Glasserie’s menu shies away from the overdone, instead honoring the essential flavors of the ingredients. Simple dishes like Herb Salad and Fava and Chickpea Stew stand beside brighter plates like crispy rabbit tacos and soft carved lamb with pine nuts and pomegranates. The dishes are garlanded with herbs, smoky sauces, fresh vegetables and subtle spices, drawn up by head chef Eldad Shem Tov. With Glasserie, Sara has managed to rework the face of Middle Eastern cooking in New York. Without flaunting itself, Glasserie has made inventive and beautiful Middle Eastern food available in the city for the first time. And what of being a female in the culinary world? "I don’t really think about it. Women do have a certain intuition that’s important in this industry." She says, "They understand how essential human contact is. I can’t imagine a front of house that was all men. Like the world itself, it needs a good balance!" We sit down with Sara (along with a couple of saffron gin and tonics) and discover the ingredients needed to create one of Brooklyn’s favorite food destinations.