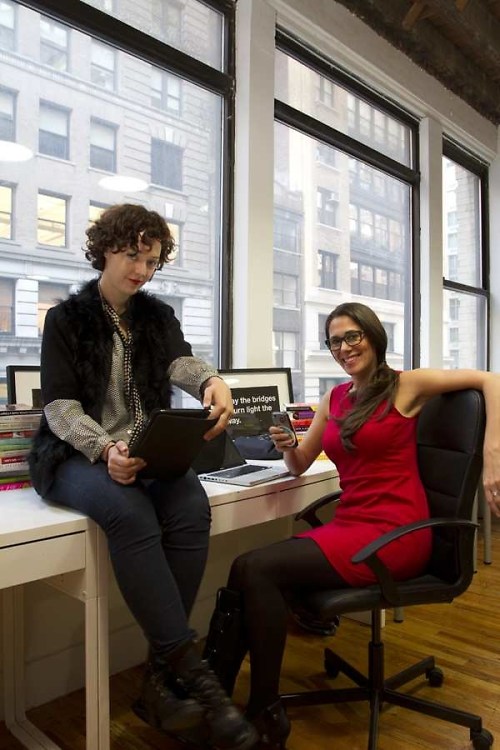 Hey boys, the girls got a new club and you better listen up! Chances are you know many of the big names on TheLi.st – a new start-up that serves as "a platform for awesome women" according to its founders, Rachel Sklar and Glynnis MacNicol. It's a group that has grown from a small table at Tom & Jerry’s bar to a veritable power list of women over 400 strong.

“There’s a lot money to be made on taking women seriously,” explained Rachel in TheLi.st's new Manhattan office. “That’s actually a quote from Cindy Gallop (of the infamous TED talk Make Love Not Porn, another well-known crusader for women), and we have used it over and over again.” Rachel and Glynnis have been sharing women’s stories in the media for the better part of the last decade, and now they are formally giving them a club to support and connect to one another. It’s an “old boys club” for women – but it’s not on a golf course, it’s online, and it’s helping to get girls, women and mothers interested, engaged, and even funded in the tech space. Powerful men are taking notice and getting on board - they have figured out that women are a good investment. Angel investor and Barbarian Group co-founder Rick Webb is an adviser and "mega supporter of women"; the NYTimes' Nick Bilton wants in on the 'Friends of TheLi.st list', and guys like The Daily's Greg Clayman, David Pakman of Venrock, CNN's Jonathan Wald and Lean Startup's Eric Ries are champions and supporters.

From candid, off-the-record advice from people like KPCB's Aileen Lee, investor Joanne Wilson, Style For Hire's Stacy London, Kiva's Jessica Jackley, The Conversation's Amanda de Cadenet and assorted members from Google, Facebook, Twitter, Foursquare, Tumblr, TED and other big names, to shopping deal promos from member-run startups like Birch Box, Gilt Groupe, Of A Kind, Everpurse, 20x200, PaperlessPost and more, there is something for everyone, and help is just an email away. I sat down with Rachel and Glynnis to hear what’s next for The Li.st, and to understand the ways in which they are innovating a predominately male dominated space.