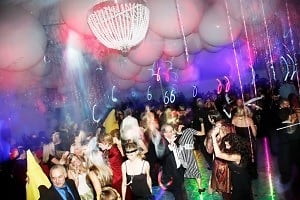 [C.Park Conservancy's Halloween Ball '07] Halloween is just around the corner. Because this is the one time you are allowed to dress however you'd like without having to explain yourself (unless of course, you're Munson), you shouldn't take this holiday lightly. Lady Gaga? Michael Jackson? Sarah Palin? Come on, we need to be a little more original than that don't we? (Sorry James). To help get you in the mood, I asked my friends to share what they were going to be this year. Their answers, below, starting with the GofG staff, are sure to get you inspired to put your best face forward at your Halloween parties.  Look forward to our "Halloween Party Guide" next week. Oh, and I'm planning on going as Pee-Wee Herman (for at least one of my outfits).

Cameron Winklevoss: I will be dressed up as Stanley Stuyvesant.

Sarah Mandato: I hate halloween, so I recycle a ballerina costume every year. 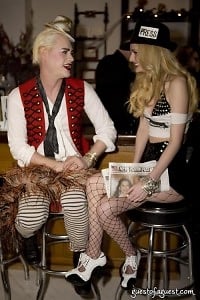 Sarah Kunst: The usual roundup of fierce black girls, including but not limited to: Tyra Banks in a Victoria's Secret Fashion Show with 6 foot tall black wings and not much else Rihanna in the "Umbrella" video complete with black leather leotard and fishnets.Dion from Clueless (pending a blonde to agree to be cher) and of course...the Guest of a Guest official group costume: Saved By The Bell. I will be playing Lisa Turtle.

Billy Gray: Do you know the movie "the Warriors?" It's about costumed gangs in Coney Island. My friends and I are going to be the gang members

Carson Griffith: I'm going to be a warewolf! There's a she-wolf in your closet! Complete with fangs.

Steve Lewis: I am an old fat elvis every year..i march in the parade annualy as well, last year i mc'd the costume contest at webster hall,, ill be mcing again somewhere but don't know where yet

Miguelina Gambaccini: Peter Davis and i are planning to dress as : Fridda Khalo and Diego Rivera ( husband and wife ) - we just got back from the most amazing trip to Mexico,so we are really into it.

Jessica Pressler: I am definitely wearing this outfit from Lindsay Lohan's new line for Ungaro, because I want to REALLY scare everyone this year.

Justin Rocket Silverman: Got a red and white stripped shirt and cap and when I put on the round glasses I really look like him: Where's Waldo?!!!

Annabel Tollman: A bunny girl. If it ain't broke....

Keren Eldad: This year my boyfriend and I are attending one party as Charlie and Evelyn (Charlie Sheen and Holland Taylor) of Two and a Half Men, and I'm doubling with Lauren O'Bryan (also Supper Clubette) for another party in matching Trashy Lingerie Cat Costumes. You gotta have a bit of slut each Halloween 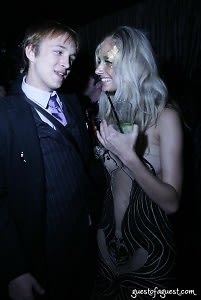 Lelaine Lau: I don't do Halloween! On the rare occasions I'm dragged out, I go as I am, but I did have a gay friend dress as me one year!

Elliot David: Where there's the old joke: a guy wear jeans or slacks or whathaveyou, no shirt, no shoes. What are you supposed to be? Premature Ejaculation, I just came in my pants. Meh. Sort of funny, but not really, and it's always way too fucking cold to pull it off. But ultimately self-aware hipsters will dress up as Morrisey Vampire Hitler, and girls will dress up like whores. It's the second best holiday for vomiting. This year I'm going as a happy version of myself. It's a stretch, but I'm gonna go for it.

Kristian Laliberte: I am going as Jon Gosselin--I plan to go to Ed Hardy and buy a head to toe wardrobe.

Serena Tufo: I have no idea--I better start thinking! I am going to a Cowboys and Indians Benefit so I think its going to have to be one of the two. I will let you know what I come up with...

Foster Kamer: I’d go as Roman Polanski, but I don’t have a French passport or the wherewithal to make one. I’d go as Cameron Winklevoss, but not tall, goyim, or loaded enough. I’d go as Bernie Madoff, but I’m bad enough for the Jews as it is. And I’d go as a McKinsey Consultant (the scariest of them all), but that’s only funny to, like, five people. So I think I’m gonna go as Eliot from ET which doubles as Donnie Darko. I just need to find a bike with a basket big enough to fit a mescaline-loaded, blanket-shrouded Krucoff.

N.B. Anybody who dresses as anyone from Mad Men should be ticketed.

Andrew Krucoff: Well, considering that Foster gave me a sneak peek of his reply, can I just say, "See Foster Kamer's answer." ?

Carter Cramer: Every Halloween since freshman year of college I've said I would be an Olsen. But only recently do I feel I've acquired the arsenal of Balenciagas and super-sized shades to pull it off. So giving it one last go this year!

Drew Grant: I'm going to be Max from Where the Wild Things are, along with everybody else in the city who won't be dressing up as the Monsters from the Spike Jonze film.

Muni Jaitly: I will of course be the MUNI METER! That was a no-brainer ;-)

Jared S. Baumeister: I will be in Asia for Halloween (Phnom Penh I think on that day). Being as I am 6'4'' and in Asia, I will be going as Godzilla...it only makes sense. Sorry I never got you anything re. travel blog content but I didn't think any of the stories from the European leg of the trip were fit for public consumption...we'll see how Asia goes 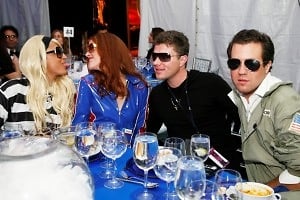 ules Kirby: My alter ego Jem from Jem and the Holograms.

Rob Rich: don’t have a clue, maybe as rachelle hruska! don't know even where I am going.

Mina-Jacqueline Au: I'm having a Pimps & Hoes party. So Ill be a cracked up hoe in lingerie, coke-powdered nose and a needle up my arm (fake one of course) ... and perhaps morning-after hair. :-)

Uri Shwartz: I'm going as roman polansky and will be wearing nothing but a 13 yearold girl. It's like a michal Jackson costume just with a girl

Megan Zilis: I usually find Halloween costume inspiration from my favorite artists. Last year I went as the ballerina in Dali's Ballerina in a Death's Head. This year, to contrast, I'm using Degas' The Dance Class, which was my favorite painting as a little girl. A bit of advice to the ladies: If there's even the slightest chance you might not make it home on Halloween, pack a small bag of clothes and flats. The walk of shame is bad enough without wearing a "sexy martian" costume while passing an emptying church on Sunday.

Ben Fink Shapiro: A club promoter, same as last year. It's easy to throw a blazer on over a t-shirt and a pair of hi-tops. 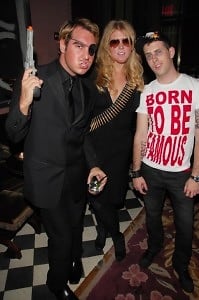 Jessica Schroeder: I am planning on either Napoleon Bonaparte or Annie Hall, though the later makes so much more sense as I usually go for one of my style inspirations (Edie and Twiggy). If I can get my boyfriend to go as Don, maybe Betty Draper?

Kate Miltner: I'm going as Three's Company with my best friend and my boyfriend, including customized t-shirts that spell out "Come And Knock On Our Door" across all three of our backs (two words per shirt). We're hanging out in West Hollywood, so we needed a kitchy costume that involved tight pants and short shorts. :)

Azikiwe Mohammed: Costume choice is always a hard decision as I usually work on Halloween. I need something that is flexible, non-hampering as the night continues, not too attention grabbing as to interfere with my work but attention grabbing enough that I don't look like I am phoning it in. Last year I bowed out of a costume all together (first time ever, not happy about it), and this year I think I am going to be a humpbacked whale. I always make my costumes myself and this year will be no different. Look out fabric bric-a-brak stores, here I come.

Camilo Ramirez: Rainbow brite, and its going to be amazing!!

Hunter Fleetwood: In an effort to not be Max or a "Beast" (Where the Wild Things Are) or a zombie (Zombieland)...as these will be the most popular costumes this Halloween...going to do something a lil more "original."  I'm going to be a twitter feed. Using an LED on my chest, I will tweet different things throughout the night that might either reflect my mood, my surroundings or what kind of drink I want. I'll also figure out some way to incorporate an "@" symbol...I'll also be retweeting what people say to me and if I want to say something to someone, I'll apply an @ before their name. It will either be awesome, or incredibly dorky...either way, I'm sure it will be fun.

Kelley Hoffman: Truth be told, I could be Lady Gaga in about two seconds; a fact which I don't know  is awesome or terrifying. Still got  a few weeks to make that decision, planning on testing out the pantless comfort zone in my own apartment before taking it out on the town.

Did I forget you? No need to get upset, just email me your costume!