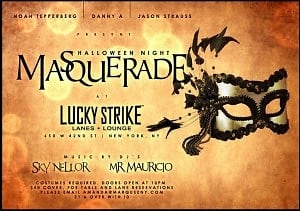 Halloween in NYC comes more than once a year.  Last night, we lived enough Hallween's for five years, however, I suppose tonight is the REAL date to celebrate for many.  But how to sift through the dozens of invites exploding in your inbox?  I'll highlight some of the more important parties tonight:

Halloween at Rose Bar: STRICTLY INVITE ONLY! Last night was just a teaser of the fun that is to be had tonight at Rose Bar in the Gramercy Hotel.  Presented by Nur Khan, Scott Lipps and Jessica Hart, Damien at the front is going to make sure that it's going to be one of the hardest doors of the night. You better be dressed the part.

Heidi Klum's Annual Party at 1Oak: STRICTLY INVITE ONLY! Heidi and her husband Seal have consistently wowed us with their Halloween parties, and costume picks.  This will, as always, be one of the hottest costume parties.

Heroes and Villian's night by Milk Studios: STRICTLY INVITE ONLY!  Hosted by Mazdack Rassi, Ben Pundole, and our favorite Ben Watts.  You know when Mr. Watts is involved, the party will be rocking!

Amy Saaco's Halloween at Bungalow 8: STRICTLY INVITE ONLY!  You can try getting passed Disco, but it will be tough, at the infamous party that Amy throws for her personal friends each year, the names in attendance are consistently big.

Halloween At Soho Grand: We have some GofG'ers attending this party and can't wait to hear about how it turns out.  Along with the Bowery Hotel, it is one of the more laid back, under radar parties to attend.

Halloween at Southside: INVITE ONLY! Hosted by Nicole Trunfio and Alexandra Richards. Last year's Bella's hosted one heck of a Halloween party and this one is shaping up to be even grander in the newly opened Southside.  If you wow Q at the door, you may have a chance getting in to dance the night away with Anthony, James and the rest of the Martignetti crew.

Halloween At Lucky Strike Lanes: Noah Tepperberg and Danny A are presenting the Halloween Night Masquerade at the newly opened bowling lounge on 42nd street.  With music by Sky Nellor and Mr. Mauricio you better be dressed to impress if you plan on striking out with the Strategic Group.

Halloween at Cain Luxe: We were assured that this will be THE party on 27th street with surprise celeb guests in attendance.

Sheik'N'Bake's Party: Featuring DJ Julio Santo Domingo, this event is going to be creating some noise at the Kim Lounge in the LES.

Halloween in Wonderland at Hudson Bar: With DJ Nick Cohen manning the music, this is going to be a great party!

Tavern on the Haunted Green: The Von Brock brothers are at it again at Tavern on the Green where they are hosting their annual Halloween party with an after party at Remix on 24 Murray st.

Halloween Slasher: 385Broadway (Between White and Walker #2F).  If you're looking for THE downtown hipster party with loads of people, check out this annual bash.  RSVP halloween[dot]slsher[at]gmail. It's only $25 at the door.

Official Halloween parade after party at Webster Hall: if the old standby (Porky's) get's too crowded, head over to Webster.

Party at Southern Hospitality: I'm guessing Timberlake will be sitting this one out, but several UES-ers will show up.  $45 VIP tickets include 4 hrs of premium open bar.

A Bloody Halloween at Bagatelle: Remi and Aymeric are taking the Clockwork Orange angel tonight starting at 5pm.  Reservations are a must.

Spooky Kabooki at Sushi Samba: Taking inspiration from Japanese Kabuki theater dress the part to be part of the costume contest with stellar prizes including a weekend in Vegas.

Halloween Bash at Johnny Utahs. The mechanical bull will be in full swing uptown tonight starting at 10pm.  Sponsored by Venom energy, there is a vodka open bar from 10-11 and both a costume and bull riding contest.  Tickets are $20. Email mike[at]clientique[dot]com.

Halloween at Marquee: Just because Noah moved uptown doesn't mean his old standby isn't getting in on the action.  Adam and Rachel are in charge downtown, doors open at 10:45.

Haunted Hostel at the Maritime: The north and south Cabanas are hosting this party starting at 9pm with guest DJ's playing all night. $25 at door.