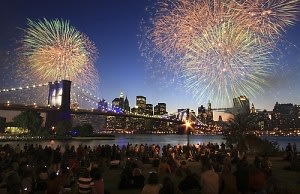 Summer took its sweet time getting here but the weekends are finally bone dry and scorching hot. What better way to celebrate than with an epic 4th of July bash? Luckily we have a few suggestions from all points east, west and everywhere in between to get you started.To celebrate the 400th anniversary of Henry Hudson's trek up the Hudson River, Macy's has moved their annual pyrotechnic showcase to the west side this year. Prime viewing locations are on the West Side Highway between 23rd and 59th streets, prime drinking locations are listed below....

4th of July Weekend Smash Off

Tonight at 10pm Lola is kicking off the weekend with an invite only soirée atop The Rivington Hotel, but I bet you already knew that.

Head to Billyburg to soak up some soulful dance music and pre-Fourth bbq 3pm to 10pm Friday. It's free and a lot more fun than being stuck on the Jitney all day.

Greenhouse might not have the best view of the Hudson but there will be plenty of eye candy on display and if you ask nicely, I hear you can get sparklers with your champagne.

Only One Place to Watch the Fireworks

Hudson Terrace's birds eye view of the river and open air cabanas will be put to good use by those looking for the best perch in the city to watch the fireworks. The pre-fixe open bar and buffet guarantee that patriotic Americans will be indulging in our national pass times of beer and bbq.

Macy's Fourth of July Fireworks on the Hudson

If you're really feeling adventurous, the ultimate spot to watch is aboard the Intrepid Air and Space Museum. Getting in might be a trick, but NBC will be broadcasting live with host Tiki Barber and performances by such 90's gems as Rob Thomas and Jewel. Technically the area is closed to the viewing public so it might be a good idea to start calling in favors.

If you're headed out east, check out the Hampton team's post on where to be and who to stalk.