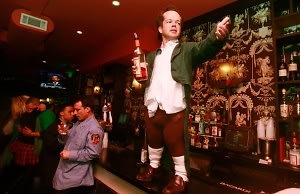 You can't throw a loaf of Irish soda bread in NYC without hitting an Emerald Isle-inspired pub. Many of them are generic knockoffs. And most become intolerably obnoxious every March 17th. Here's a few that will keep your eyes shining tomorrow, at least until that Guinness and Jameson daze sets in.

Sláinte: 304 Bowery, East Village. On the Bowery, spiritual home to generations of drunken Irish layabouts (N.B.: I'm 3/4 Irish so can get away with such slander). Sláinte (Irish for "cheers") has a spiffy, minimalistic interior which, for better or worse, doesn't hit you over the head with it's Irishness. But the bartenders' lilting brogues are the real deal. And a generous 2-4-1 drafts policy until 8pm might convince you you're by the Liffey all night.

Donovan's: 57-24 Roosevelt Avenue, Woodside. Far from the green puke-stained parade route on Fifth Avenue, this Queens pub (in Woodside, the borough's Irish stronghold) not only removes you from the midtown madness, but is often said to have the city's best cheeseburger. Some grub and the ride home on the 7 train (unless you're nearby, of course) will be enough to sober you up and appear halfway presentable at work on Thursday.

St. Dymphna's: 118 St. Mark's Place, East Village. A bar that is on St. Mark's Place but not of it. Like Sláinte, St. Dymphna's is staffed by off-the-boat types, which is a pretty good barometer of authenticity. Like Donovan's, it's got a good burger (though it tastes oddly like meatloaf). Also, there's a great little outdoor garden area which will hopefully be open if the forecast (62 and sunny) holds up.

Milano's: 51 E. Houston Street, Nolita.: Despite a name that recalls Italian fashion capitals and Pepperidge Farm baked goods, Milano's is about as Gaelic as it gets. It also opens at 8am for the true fanatics who can't bear the thought of being awake on St. Paddy's sans buzz. Ask the bartender about the time Bono drank there for four straight hours and left a $2 tip. Spoiler: it involves the owner guilt tripping him into a proper tip by holding up the bills and singing "I Still Haven't Found What I'm Looking For."

Kennedy's: 327 W. 57th Street, Hell's Kitchen. My memories of St. Patrick's Day 2007 are hazy at best, but I do recollect this 57th Street old-timer as a soothing retreat from the parade chaos nearby. Mostly because everyone inside was old. And Irish.

McSorely's Old Ale House: 15 E. 7th Street, East Village. OK, so this place is probably better avoided on the big day itself. But its history, quirks (it serves two drafts--McSorely's Light and McSorely's Dark--and one serving of beer comes in two  mugs) and random pricing (if your waiter likes you, you'll pay a fraction of what you owe) make it a good one for March 18th.

The best of the rest: