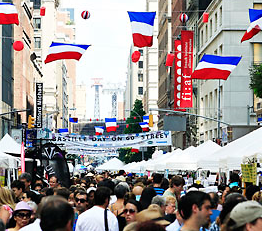 This Sunday help celebrate the French National holiday, Bastille Day (July 14), by engaging in a bit of French fun and culture in the city. We've got some ideas. Vive la France!

First, check out the annual 3 block Bastille Day festival on 60th street, featuring a family-friendly street fair  with traditional french music, dancing, food and wine. The street fair hosts booth after booth of French themed goodies like cognac, crepes, cheese and chocolate as well as an array of beauty products and shopping. The street fair will also host live music, live performances, wine and cheese tastings and French workshops for those looking to brush up on their Francais.

After hitting the fair, check out some of your favorite French restaurants for a discounted prixe-fixe meal during French Restaurant Week, going from July 10 to July 17. [Via]

After dinner, hit up The Paris Theatre on 58th (only a few blocks from the festival!) for a French Film, currently playing Michel Leclerc's The Names Of Love.