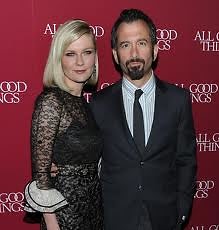 At the "All Good Things" lunch held on Friday at Michael's, the film's director, Andrew Jarecki, confessed to his obsession with secrets and explained why he cast Kirsten Dunst before Ryan Gosling.

The film, which stars Kirsten Dunst, Ryan Gosling, Frank Langella, Lily Rabe and Kristen Wiig, tells the tale of the scion of a real estate tycoon who turns down a murderous path.

Jarecki, intrigued by this true-life story, shared why he was drawn to this haunting subject matter.

“It’s always a fascinating story to see a guy who came from such enormous wealth, privilege and power, who was obviously not interested in pursuing that and wanted to open a health food store in Vermont," he said.  "And he meets this beautiful girl from a very modest family and falls in love with her, then 10 years later she disappears. It just seems like a lot of inherent conflict in that character and in that story.”

During Jarecki’s toast, he noted his abnormal decision to cast the lead female role before the lead male role. While Ryan Gosling was Jarecki’s first choice for the lead male role, Jarecki knew from the onset of the project that Kirsten Dunst was the girl for the movie. In our interview, Jarecki explained:

“Kirsten was the ideal person to play the part of the missing girl, because when she disappears you miss her," he said of her ineffable on-screen charisma and the way she can play on the audience's collective heartstrings. "We just weren’t afraid of taking the risk of casting her first.”

In light of the mysterious roles her created in this movie, Jarecki vowed going forward to continue his quest for hidden information this new year's eve--possible fodder for his next cinematic venture.

“I think I’m going find some interesting secrets around new year's," he said. "People make new years resolutions and it reveals a lot about themselves.”