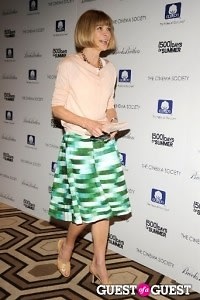 At the Plaza Hotel last night for the Alliance Francaise Gala, editrix extraordinaire Anna Wintour spoke about a little known secret to success in journalism and dished on her daughter's career trajectory.

Wintour, who would present the Trophee des Arts to Marc Jacobs later that evening, wore a dazzling flower-embroidered black coat on the carpet. Unlike the previous evening, where she snuck into the Dior Couture reopening celebration undetected by the staff,  Wintour made a grand entrance as New York City's French elite turned heads to catch her rare smile.

Since the occasion was in celebration of "cross-cultural understanding,"  we thought it most appropriate to ask her why the three most notorious, leading women in America's media world -- Wintour, Arianna Huffington, and Tina Brown--all happened to be educated in the United Kingdom.

Initially, she deflected our assessment.

"Well, there are many wonderful American women who work in the media as well," she said. "You just happened to pick three of us."

But after ruminating over the question some more -- and remarking how she couldn't speak on behalf of Huffington and Brown-- she seemed to pinpoint something the U.K. provided early in her career that the U.S., she felt, wouldn't necessarily have:

"You know, I think that, one of the strengths…. one of the lucky things that happened to me by being brought up and working first in England is that, because everything is so small, you get to do everything. So it's not as compartmentalized as it tends to be in the United States. As a result, you have really good training."

Wintour started her career in journalism at Oz, the publication of her older boyfriend Richard Neville, and later moved to Harper's & Queen as an editorial assistant: there she became a journalistic omnivore learning the inner workings of a major magazine that guided her through her meteoric rise.

Bee Shaffer, Wintour's daughter and '09 Columbia grad, is currently building the foundations of her career as the editrix did so long ago.

Rumors have been floating around that Shaffer signed on to work with Ricky Van Veen (of College Humor fame) at his new L.A.-based production company, Notional.

Wintour confirmed that Shaffer was indeed working with at Notional, opting for a career in television production over fashion. Wintour expressed to us how she was in full support of her daughter's endeavors there and that she wants only  "for her to be happy." Mother Anna knows best.