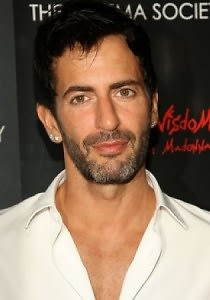 Last night’s Alliance Française gala at the Plaza, we quizzed Anna Wintour on Marc Jacobs and Jacobs on the burqa's fashion potential, his history with Carla Bruni, and the French.

Anna Wintour was in attendance to present Jacobs with the Institute’s Trophée des arts honoring Franco-American intercultural relations. She floated into the bejeweled sea of black silk and furs looking less like a sailing vessel than the most exquisite umbrella in the world, her reedy Chanel-and-Marc Jacobs-clad frame poised beneath her iconic pageboy bob. After submitting to a brief blitz of photographers’ flashes, the Vogue editor fluttered deftly away from reporters-- not so much with the self-assured stride of a discreet empress as with the determined dash of a bursting bladder.

We loitered in the corridor long enough to ask a relieved Wintour about France, fashion, and Jacobs. We wondered how she thought the honoree exemplifies his generation of designers.

“Through his fearlessness,” she said. “He breaks all the barriers, which I think is so important in fashion. And that, combined with his brilliant eye and his interest in popular culture and culture generally, he's just a very special person and a very special designer, and I think both France and America are extremely lucky to have him.”

Wintour has often remarked that fashion can and does reflect the political climates of the societies that produce it, a dimension  Jacobs has brought out explicitly with his T-shirt series calling for the LEGALIZATION of GAY. One of France’s most heated social controversies is now centered on a question of fashion, and we asked Wintour about the untapped couture potential of the burqa.

She laughed, but demurred to opine:

“I'm not a designer. I leave that to Marc. I'm just an admirer of his.”

So we asked Jacobs and found him unsure.

“I really don't want to comment on that,” he said. “I'm not sure how I really feel about that whole controversy or discussion or whatever you want to call it. In fact I was talking about it the other day, and I don't know.”

What he did know for sure was that he felt “honored” to succeed such luminaries as Lauren Bacall, Isabelle Huppert, Quincy Jones, and Christian Lacroix as recipient of the French Institute’s prize. Jacobs, who lives part of the year in Paris and confesses to speaking French functionally but not having mastered verb conjugation, does not dream of dressing the glamorous Mme. Sarkozy (Carla Bruni) in her current role, but reflected fondly on their early collaboration.

“I've worked with Mme. Sarkozy, with Carla, many, many years ago," he said. "She was in many of my shows when I was working at Perry Ellis, back when I was in my mid-twenties. But I haven't seen Carla, or Mrs. Sarkozy, in a long time. She's a great girl, she's always been a great girl, full of energy and amazing vitality, great model, so we worked very well together, and it's been a long time since I've seen her. We have a lot of mutual friends and a lot of good times.”

Attention, Carla Bruni: Marc Jacobs is calling you through the Internet vortex.