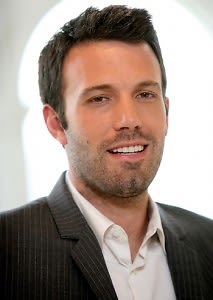 When we caught up with Ben Affleck at "The Company Men" premiere last night, the dapper actor  discussed the hardships of identity and employment during economic hardships.

Given that he plays the role of a man struggling to find employment after a layoff from his cushy corporate job, Affleck expressed the empathy he has for millions of unemployed Americans who are currently unable to find work. He noted that many of his childhood friends are also suffering the very same economic hardships seen nationwide, and he drew on them as inspiration for this part.

"I'd basically love to stand here and say I had such a 'hard time' researching this movie about people struggling economically, but that wasn't the case," he told us. "I mean, basically anywhere I went -- the movie was shot where I grew up, Massachusetts -- I could just go and hang out with guys I went to high school with, guys that I grew up with… so many of them are dealing with that stuff."

After losing a plum salary job, Affleck's character is offered a job in drywall installation from his blue-collar brother-in-law, played by Kevin Costner.This movie, as such, brings a focus to the mundane struggles of quotidian life in Middle America, a far cry from the fantastical heist plot that pervades his recent "The Town."

But the raw verisimilitude of "The Company Men" and its gaze at the struggles of layoffs certainly must have been at least somewhat inaccessible to Affleck, given his life of Hollywood glitz ("The Town" recently nabbed over $142 million at the box office) and the sheer impossibility that he will face unemployment in the future.

He countered with an even deeper remark:

"These characters were not guys who were making 50 k a year and getting laid off. They were making six-figure incomes and getting laid off. I like the idea that my character was a working class guy, went to B.U., got a good job, believed in the system, built himself up, you know, bought into all the things that were taught, which is, if you do the right thing, and if you work really hard, you can get that promotion, and you can make money, and you can buy a jet ski, or whatever it is. And then, when he found when he did all those things right, and then got it all yanked up from under him, he wonders, 'who am I'?'"

So the movie's not about some construction worker who hits the bar to mope about his mediocrity (like in "Good Will Hunting"); it's about well-educated, extremely successful, white-collar men who happen to get fired out of nowhere in light of the harsh economic times. Their prestigious jobs inform their identities, and without them they fall prey to a certain type of existential crisis.

Affleck continued his rhetoric on the American worker:

"We define ourselves, in this country, particularly so much by the button we wear on our vest -- 'I'm an accountant, I'm a plumber, I'm a bus driver, I work on Wall Street' -- and if that's gone, what I found from talking to people was that that was the most confusing thing: a sense of a loss of identity. And certainly no one wants to have an identity that says 'I'm unemployed,' because that's like a non-identity."

Such a statement could likely have come from the mouth of a polished politician soliloquizing on economic hardships and the self-identification through vocation. In fact, Affleck has publicly stated his fantasy of being "independently wealthy enough… so that I can run for Congress on the grounds that everyday people should be in government."

Perhaps a future political career is in the works for this guy. But if indeed he wants to play the down-homes, of-the-people vibe, he's certainly perfecting his take on Hollywood, which he insists presents an ample dose of hardships and sobering realities even for those who have made it big.

"This business is all about uncertainty," he said of Hollywood. "You learn from being an actor when you first start out that you can try to audition for a job, maybe put a couple of lines on a TV show, but that doesn't mean you'll have work for the rest of your life. You know, you're always auditioning for your future. There's no seniority. There's no tenure. So it gives you this very sort of 'fight for your food' mentality that stays with a lot of actors, even when they become successful, because there's always the younger girl or guy. So it is, by its nature, unpredictable, even though it probably doesn't look that way sometimes."

And with that assessment of identity and the economy, Affleck fled the carpet and entered the theater for the showing sponsored by Asellina at the Gansevoort and DOBEL Tequila.

Ben Affleck• The Town• The Company Men• Good Will Hunting