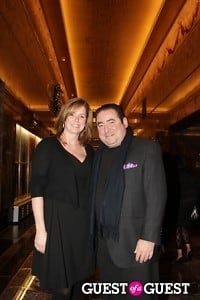 is elaborate plans for a Christmas meal... At the Empire State Building for Food Bank NYC’s Culinary Council, Lagasse treated us to his suggestions for a big holiday feast.

"Well, there’s a lot of different traditions...Spain, Portugal, the U.K." Lagasse started, glancing at his wife, with his wife, Aldeh Lovelace. "That said, I’ll go with the Italian tradition of seven fishes on Christmas Eve. Seven fishes on one dish. Let’s see what happens."

Personal tastes are unique and inarguable, but the territory gets dicier when guides adjudicate on food; we asked Lagasse for his opinion on the Zagat/Michelin battle:

"Zagat Guide has been around for a long time and has really reached a lot of people, while the Michelin Guide is very sincere, serious for the world and for the 'foodie' people. Zagat reaches everyday people; they go to the supermarket, grab one of their guides, and there are lots of voices behind it, instead of a small committee deciding on rules and regulations."

And with that, he went on to participate in a little degustation and  judgment of his own.