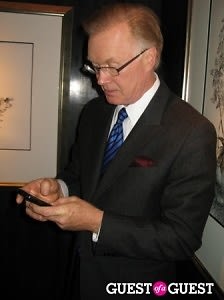 At a luncheon for "The King's Speech," Chuck Scarborough told us he sided with Keith Olbermann and disagreed with the recent suspension of the anchor for his campaign contributions:-

"Frankly, I'm not sure that the Keith Olbermann suspension, however brief it was, was really called for under the circumstances," Scarborough said. "That's a rather rigid interpretation of the rules, simply because Keith's entire m.o. is to be partisan. There's no pretense of objectivity, so I'm not shocked by what he did."

In light of recent newscaster mess-ups that actually appeared on-air and the film's focus on the troubled verbal articulation of King George VI, Scarborough offered some advice for how to stay calm.

"Well, inevitably one does," he said of on-camera garbles. "And the secret is to never let them see you sweat. Get through it with humor and nonchalance. Obviously when you're speaking extemporaneously about a news event and you make a gaffe or you flub, it can be pretty terrifying when you're first in business. But eventually you learn how to correct yourself."

Scarborough saw "The King's Speech" for the first time at the Hamptons Film Festival, and the only thing he hates more than an on-camera blunder is the development around his escape house, which he's had in South Hampton for 20 years.

"You see how much farm land has been consumed by developments," he lamented. "It is a little distressing, the crowding."

It was a thought that could be cured with an afternoon promotional lunch, and Scarborough scurried away figuring out his new Blackberry Torch.