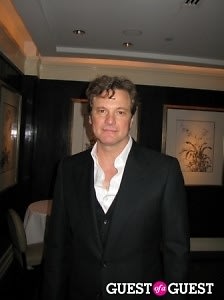 In "The King's Speech," a historical drama about the speech therapist who helps King George VI overcome a stammer, Colin Firth plays the verbally challenged monarch. At a DeLeon Tequila-sponsored luncheon at the 21 Club this afternoon,  the actor admitted to us a dirty little secret.

Though Firth has been noted for his articulateness when playing the swoon-worthy Mr. Darcy in the British adaptation of Pride and Prejudice or in his Oscar-nominated role as George Falconer in "A Single Man," he admitted that just like any actor he has qualms about his ability to perform orally.

"Every actor has anxiety," he said, "Whether it's that you don't remember your lines, or where the theater is, or who you're playing...That's the abyss."

In fact, he remembers having a particularly dark moment before the opening of Three Days of Rain, in which his character, Ned/Walker, has a long monologue at the start of the show. The tension was overwhelming.

"You lock yourself in the bathroom," he said, discussing the need for composure, mirror-gazing, Zen-retrieval. "It's like a car crash," he said. "You pick yourself up and go on."

He then moved on to practice his art of casual cocktail bavardage.