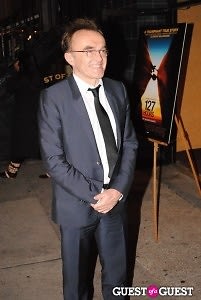 You might think that given some of the rough terrain captured in Slumdog Millionaire or his new film 127 Hours, Danny Boyle might be something of a free-wheelin' adventurer. At the 127 Hours premiere last night, though, he set the record straight.

The film chronicling the true story of a hiker trapped by a boulder near Moab, Utah required Boyle to set up shop in the original rustic setting--much to his dismay.

"We filmed in Bluejohn Canyon," he said, "which is where the accident happened, and it's very, very remote. We worked there for a week, so we camped out, which was very distressing for me, because it's so quiet, you can't sleep it's so quiet. It's unnervingly quiet."

Outside of the urban environments he prefers, Boyle made a resolution to himself the first night of filming.

"And I realized as I lay there in bed," he said. "I realized that it was 33 years since I'd last been camping. I'd be quite happy if it's 33 more before I ever go camping again."

The image of the gallivanting Boyle, the Transcendental Boyle has now ceased.

His opinions could change, though, as he admitted to a total misreading of James Franco the first time they met for the movie.

"Well, when we met here in New York, it wasn't a very good meeting actually. He looked stoned. He was completely out of it. It was like we weren't in the room with him. It was like, 'James, hello?' And then the casting director said, 'Oh, don't pay any attention to that, he's not. He's just sussing you out, and it's one of the ways i which he keeps the whole Hollywood thing at a slight arm's length, you know. And so we met him again, and he was brilliant."

As long as Boyle finds the right actor for the part, he's ultimately--and certainly where Franco is concerned--willing to take on any environment for his cinematic conquests.

Click here for more photos by Scott Kosiorek, and tag yourself and your friends.