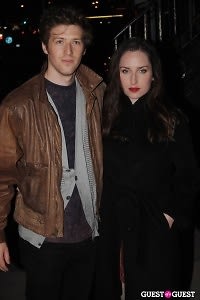 At The Bunker Club last night for the 127 Hours after party, we caught up with the famed open-relationship couple Daryl Wein and Zoe Lister-Jones. They revealed how MILFs will help them succeed and what it takes for a New York City romance to thrive.

Wein and Lister-Jones, whose Breaking Upwards chronicled in indie-pedigreed fashion their dicey foray into an open relationship, are now working on a film about a single woman in New York produced by Michael Swell's Groundswell Productions called Lola Versus, co-starring Lister-Jones and allegedly  Anne Hathaway.

"We're also writing a movie called Motherfucker for Fox Searchlight," Wein said with a proud smirk on his face. "It's about a man who bites off a mother's arm in a cave," he said in an attempted jocular reference to 127 Hours.

"It's about a young couple," Lister-Jones elaborated, "and the girlfriend brings her boyfriend home to meet the parents for the first time, and he falls in love with her mother."

But our big questions hinged on whether the couple is now monogamous.

"I think it's, it's, you know, it's an ongoing conversation that we always have," he said, "but we remain in love and happy as a couple."

But what, we wondered, does it really take to be in love in New York?

"I agree with everything she said," Wein added before the two faded into the Bunker club

Click here for more photos by Scott Kosiorek and tag yourself and your friends.