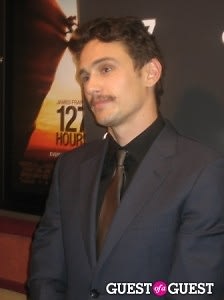 James Franco arrived half an hour past the screening time of his new movie 127 Hours, in which he plays a mountain climber who fights to survive after a boulder falls on his arm and traps him. It seemed the actor-cum-Renaissance man was trapped in is own right, with his tardy appearance at Gucci-sponsored Chelsea Clearview Cinema event.

Franco was delayed in New Haven at Professor Michael Warner's course at Yale, where he is pursuing a Ph.D.

"It's not the most exciting answer," he said of the class, "Walt Whitman..."

His school schedule was so crammed during the shooting that Danny Boyle told us Franco had to sleep in LAX one night.

"Not one night...many nights," Franco clarified.

His insane academic schedule--with M.F.A.'s up the wazoo--made filming this movie particularly difficult. "I didn't really have a choice," he said of his flights back and forth between New York and the set location in Utah.

"For the past two years, I have devoted myself to school, I really didn't do movies during the school year, and I almost made it through two years of school by just working summers, and then Danny Boyle came along and said, 'I have to shoot in March and April, cause we're doing a play later this year,' so it was hard to say, 'No,' but it's very hard to go to school,'"

Franco got a mixed reaction from the schools at which he's pursuing degrees:

"So some of the schools understood. NYU understood, and Brooklyn College understood. But Columbia didn't. So I did my best to get to class. And that required red-eyes and sleeping in LAX."

To enter into the mindset of real-life climber Aron Ralston, Franco worked with Danny Boyle to get to the point of exhaustion to mimic the debilitating fatigue of being trapped for five days. The cross-country flights did well to add to that wear and tear. 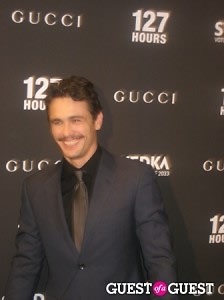 Of course, the gory scene in which Franco cuts off his arm has served as something of a buzz generator, but Franco eschewed the actual severity of the scene:

"Eventually people are going to be let down by all this build-up," he said,

focusing instead on the dilemma the film beckons the audience to address.

"I think what this film does," he said, "is gives an experience that most of us, that--none of us will ever end up in a situation where your arm is trapped and you have a choice to cut it or not. I doubt any of us in that situation...it allows the viewer, it is a very experiential film going experience. And you ask yourself the question, what is important? What would you do?"

Franco even took some pot shots at other cinematic characters faced with similar survival-in-solitude dilemmas but asserted the unique hardship addressed in his role:

"They don't make movies like this. I can't think of another movie that's quite like this. Even Tom Hanks in Castaway, he had like a whole island to walk all over, and he had a ball to talk to and everything. And I just thought, 'I'm never going to have an opportunity like this again.'"

Despite the agonizing subject matter of the film and this portrayal of solitude, Franco was actually chosen for his comedic acting abilities. He explained how that panned out in the creation of the movie:

"I think as far as the comedic side of me, going into it, without even talking that much, I got a real sense that it was really important to Danny [Boyle], especially at the beginning to balance out some of the intensity that everybody knew was coming.  I feel like we almost pushed the goofiness a little far, but I felt like we were safe, because it was never going to get too goofy, because you know, like, 'OK, something dark's coming.' And then it's really important throughout the movie, because there's only one character for a lot of the film, you can't suddenly say, 'OK, I'm gonna bring in the antagonist, I'm gonna bring in the comic relief character.' It all has to come out of the same character.'"

How much did he contemplate survival?

"I think the fact is, we all have this need to survive, right? You see animals with the paw trapped in the trap; they chew through it. I believe we would all attempt something like what Aron did. It doesn't mean that we would all be as successful, or as technically successful as Aron, but I think there's something in all of us that is capable of this. I think that Danny's intention is to present the story in such a way that the character isn't this distant hero that we're looking up to but instead is a representation of something we're all capable of. For the character in the film, he has this will to survive."

But has he ever encountered a true near death experience?

"No, I mean, the fact is, most of us will--we all have near-death experiences, you know what I mean? You walk down the street and it's like, 'Oh, there comes a taxi cab or a car or what ever: Oh, that was close.'But you don't, we never, you know, most of us will not have five days of contemplating death and having to face it. So I think that's one of the things this movie provides. It's a short period where we can all kind of put ourselves there and just like the character in the film ask ourselves what is important to us."

So he would have cut his arm off?

"In Between Set-Ups, He Was Stuck In This One Place, You Know, He Would Pull Out Proust"