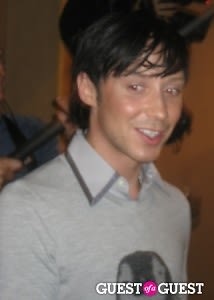 Olympic figure skater Johnny Weir attended the premiere of 127 Hours at Chelsea Clearview Cinemas last night. He explained to us what stylish goods he needs this holiday season and how he takes on the great outdoors just like James Franco:

Weir, who says he's busy with skating gigs, a jewelry line, a book due out in January, a music single, and his TV show, told us he really has a hankering for Hermes this holiday season:

"I would love a hunter green ostrich Birkin bag," he said. "I mean, I would love that. I have my Chanels. I have my Balenciagas, but I just have one Birkin. I also love Chanel watches. And there's a rose gold chronograph one that I've been loving. But that's very excessive and very fancy."

"But last year I had my mom get me a Swiffer...Swiffer Wet Jet," he said. "I'm very simple. I'm a clean freak. I clean everything, as long as its sitting there. If my dog is sitting long enough, I'll clean him. That's just how I am."

Seldom does Weir get the chance--in the juggling act of his jack-of-all-trades existence--to make it to a premiere, and as such, he felt confident about being able to stomach the more gruesome parts of the flick that Franco's character endures.

"I mean, I rarely actually get to go to a movie," he said, "so I'm excited for tonight. I can sit through a whole movie, no matter how gory and arm-cutty-offy it is."

Weir's secret of course is that he is something of a woodsy explorer himself:

"I mean, ice can be rugged, no matter if it's indoors or out," he said. "I think the most outdoorsy thing is that I stomp my way down Madison Avenue in heels."

And he stomped off into the theater.