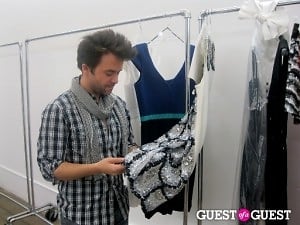 It's rare for a banker to go from white collar on Wall Street to wearable couture on Seventh Avenue, but designer Jay Godfrey did just that. Had it not been for one brave decision, the celebrated women's wear designer might still be trapped in a cubicle.-

“I was literally trying to get laid off,” he laughed. “I knew I wanted to design menswear. But I was in the mentality of get a solid grounding in finance, then do what it is you want to do.”

But after fourteen months of sheer boredom, Jay finally quit his 9 to 5. And with no design experience, he applied to Parson’s.

Luckily for Jay and women everywhere, Parson’s saw the untrained designer’s potential and accepted him to their prestigious program. Before long he was interning for Oscar de la Renta, and at the advice of a mentor, began designing women’s clothing.

“I didn’t know anything about women, other than I loved them!” he said. “But I wasn’t playing in my mom’s closet as a child or flipping through fashion magazines, so it was all new to me.” 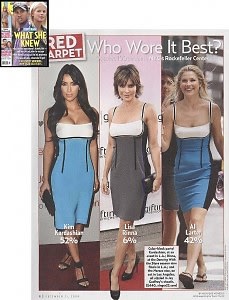 He quickly found his knack for creating female fashions that were “contemporary in price, designer in feel.” Now his collection is sold in Neiman Marcus, Bloomingdales, and a number of luxury boutiques worldwide.

And while everyone from Kim Kardashian to Petra Nemcova has worn his line, Jay is most excited to see everyday, New York women wearing his designs.

“That’s such an honor,” he gushed. “Real women have so many great choices of what to wear, so for them to spend their money on my designs is really flattering.”

So as one of those, real-life, New York women, I asked Jay to lend me (and other 20-something ladies in the city) his designer expertise on just what to wear for some special NY occasions.

A date on the LES – The silk blouse has come back with a vengeance. Try pairing this with a cute pair of sequin shorts and some opaque tights. It’s very chic.

A job interview- You want to look professional and not trying too hard to stand out. A lot of women feel like they have to go all black, but I’m all for charcoal, gray, and navy. Keep it chic and modest, but don’t just do a standard black pantsuit.

A night out at The Standard- It’s an eclectic crowd, and if you’re going to The Standard you do want to stand out. Stay away from head to toe looks, or going all in one designer. Try contrasting an evening skirt with a t-shirt.

A movie premiere – I love the colorful cocktail dress! I’m absolutely biased, but I think the color-block look is great, especially for this occasion.

A night at the Opera- I’m loving longer lengths. A gown is a must, but it should be youthful and close to the body.. No need to drown yourself in taffeta. I think a long jersey dress, maybe paired with a fur shrug is really sexy.

A Lady Gaga concert at MSG – Well there’s two ways to approach this! If you’re a diehard Gaga fan, you can dress like her and try and out-freak all the freaks! I say, though, dress like Gene Simmons! There’s going to be hundreds of Gaga’s inside, but only one Gene Simmons!