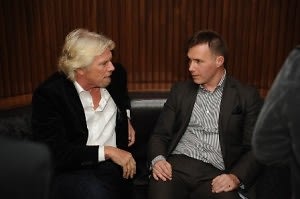 Richard Branson's Project, a monthly iPad-based magazine, launched on Tuesday. At the Royalton after party, we discussed the nitty-gritty details of the venture with magazine's editor Anthony Noguera.Noguera, a career journalist, hails from Cheltenham, a provincial town in southwest England, and he moved to London to be a journalist when he was 19. A graduate of Birmingham University, he started at a heavy rock magazine called Metal Hammer and then went to Sky Magazine, a smart British style publication in the '80s. After editing FHM and and then an intelligent men's monthly called Arena, he moved into the dynamic tech sphere. In light of his journalistic background and his media consultancy company AI (Accelerated Intelligence), Noguera landed the role as editor of Project. We interviewed Branson about the project, but we also quizzed Noguera for further insight; he had the following to say about the new age media product:

GofG: Richard Branson anticipates some friendly competition with Rupert Murdoch in the iPad journalism world: has this been part of your motivation all along?

AN: We didn't know that Murdoch was doing anything until 10 days ago, so this idea that there's been some kind of battle...blab-… just bullocks.  We had no idea. And also, we don't care.  In the U.K. there are 2,200 news style magazines… and hundreds of newspapers…and um, nobody gives nobody rights to stories saying they're all against each other… it's just that we happen to be an iPad. There's no… there's no battle. It's a great angle for the press, that there's a baron vs entrepreneur. But you know what, they're doing a daily newspaper and we're doing a style magazine. I mean, we're not in competition.It's amazing to think, on the iPad, if you're lucky, there's two dozen iPad magazines…  there's less than two dozen.  So, that's the smallest market in the world, so I think we can afford to be a bit more generous with each other.

GofG: Project is billed as a monthly magazine, but it has constant updates. What is its actual identity?

AN: We wanted to say, it's the world's best monthly magazine, every day. That's the idea. It looks like a style magazine, and it thinks as a website. So, I guess, frustrated, if I buy a monthly magazine app, I read it in two hours, then there are 28 days, 29 days where it doesn't do anything.  We want this thing to be alive all the way through the month, so, there's lots of ways it will update.  Some of the pages, there are things built in which are RSS fed.  So, on a technical level, every time you're in a wifi area, those pages will change, and they will grow.  So, a panel which is that big, a width of the page, you will swipe it, and it will just go on and on and on, all the way through the month.  Some pages will drop in.  Whole features will appear in the app. all the way through the month.  And then there's the blogs and the comments which are actually in the app.  So, you don't shut the app down or go on the internet.  Everything happens within the app., which is really one of the biggest things, which is revolutionary about what we're doing, which is, we're creating an entire environment, and you don't have to leave that environment.  You can stay in that environment. 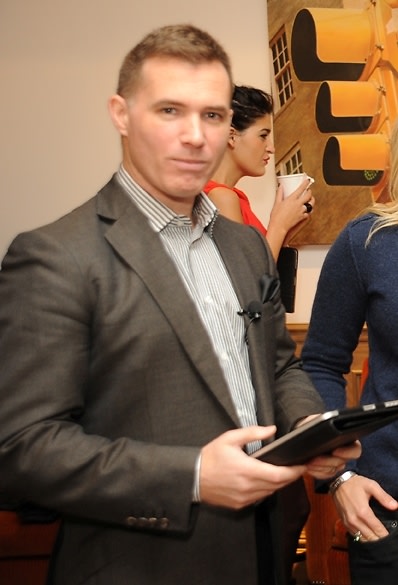 GofG: Part of the beauty of a monthly mag, though, comes from a reader's ready knowledge of the inventory--the entire content is seize-able, accessible. Do you worry that your constantly updated content will be lost in the vortex of the web?

AN: No.  No. That doesn't worry me. You can choose how and when you interact with the app.  So, if you want to be switched on like that, you'll have the blog open with the comments. If you just want the more considerate approach, you'll wait until we take what's best of the blogs, and we'll put them into the app.  And then, in the app itself, what I love about it is, you can read it, you can watch it, you can listen to it.  It's up to you.  So in the Jeff Bridges cover story, you can read it as a piece of prose, you can watch the videos, and then you can put your headphones on and listen to Jeff Bridges talking.  And that's up to you.  And you don't have to do it in one go.  I love the idea that this thing keeps delivering to you.  So, today I read it, tomorrow I watch it, the day after that I listen to it.  One of the ideas we want to bring into the app is the idea of the cover star doing an overlay.  So, half way through the month, I want the cover star to mark up their cover story, and then when you press a button, you will see their notes on appearing on their cover story.  So they will, "Hey I don't remember saying that.  It's interesting you mention that."

GofG: The magazine is quite transatlantic. Are you hoping to access both the U.S. and U.K. markets?

AN: Oh absolutely.  It's absolutely crucial.  I had issued a magazine for six years called Arena.  Arena was a magazine which was as popular in the U.S. as it was in the U.K.  It was always a niche magazine.  But it was a magazine that attracted a brilliant audience.  It attracted an audience of creative people.  And what we wanted to do was mirror some of that, and increase its reach.  And there are plenty of people in America who are interested in the whole world.  This idea of all Americans only giving a shit about America is fallacy.  There are people in England who don't care about anything other than what happens in their town.  And there are people like that in America and everywhere else in the world.  They are not our readers.  We are interested in people who travel internationally.  We are interested in people who watch BBC America.  And we are interested in people in the U.K. who watch HBO.  And there is common ground.  There is a lot of common ground.  A show like "The Office" demonstrates that.  You know, where the right kind of America, an urban, upscale audience, loves Ricky Gervais in "The Office".  But also, same thing in the U.K., you know, adult people in the U.K. who love, love "Curb Your Enthusiasm".  That's a small show, you know what I mean?  And its finding, where does the graph, where does the axes on the graph intersect, and its honing in on that.  So we're never going to be the biggest in the world, but we want to be the most interesting. 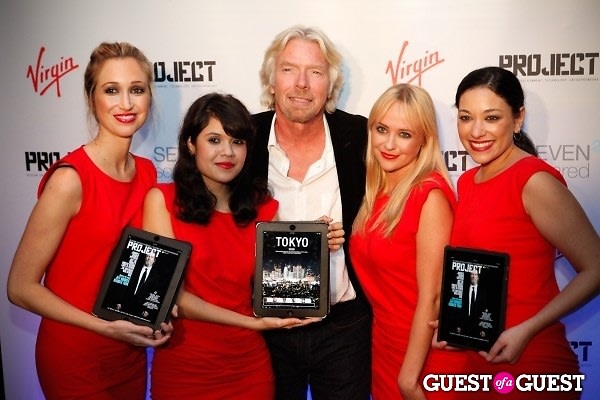 GofG: Of course, Richard Branson started the magazine Student when he was a teenager, but do feel that as a businessman, he is out of his element in journalism?

AN: In fact, his first business, Virgin was born, it was the publishing company of that. He was 16, and his mate was 15; they launched this thing, there had never been a national magazine for students in the U.K. Never.  And he got off his ass and he did it.  He edited it, and he sold it. When he got asked, why did you start [Project], was it to make money?  He said, :No, I wanted to be an editor."  That was it.  And, what I love about Richard Branson is, he isn't strained by anything.  He says, "I want to be an editor, so I'll start a magazine" when he's 16 years old.  He says, "I want to start an airline, so I'm going to start an airline."  And you can't tell me not to.  He says, "I want to go to space, so I'll start Galactic."  Virgin Galactic is the first-ever commercial space flight.

He is the ultimate entrepreneur.  He backs great ideas.  And it's exciting to be around people like that.  It's also fucking scary.  Because the guy is detailed crazy.  He knows everything that's going on. The questions he asks are excoriating.  He really gets to the point.   I guess you don't get to be the rebel billionaire unless you got a handle on that stuff.  And he really does.  I mean, you see him chatting, and boom, out of nowhere is a question about the advertising, boom, there's a question about the talent… you've got to know your shit.  When you're with him, you've got to know your shit. The running joke is that he's the end-of-level boss, you know like in a video game. He's the end-of-level boss.

GofG: Take me back a little bit: what was the actual origin of this idea?

AN: It was a really kind of condensed five months into one sentence.  Giovanni Donaldson, he was the guy at Virgin that wanted to get into this space.  This was before the iPad was released.  So we all knew it was happening. He wanted to get into this space.  So he said to Virgin, we should do this, we should be a part of this. Everyone was like, yeah whatever whatever.  So, I mean because he's from the airline side of the business, you know, so, as a private project, as an entrepreneurial project, he started investigating what it would take to do an iPad magazine… He went to a company called Seven Squared , who are our partners, and Seven Squared went to me, and my company's called AI (Accelerated Intelligence)

And they came to AI, and said look, "We just want some preliminary work, we were working on ideas in that space already, but it's expensive and it's difficult." And between the three of us, bearing in mind that Seven Squared and Virgin are the predominant partners, we broadly created it, I suppose.

GofG: Has it been difficult for Branson to juggle his many ventures and responsibilities during the launch of this project?

AN: I had a meeting with Richard Branson a few weeks ago, and the last person he met before me was Nelson Mandela.  So, that's what his life is like.  One minute he's in Geneva with what they call "The Elders"   and he's hanging out with President Jimmy Carter, Nelson Mandela, Desmond Tutu… [they] get together to try to involve themselves in sorting out world problems.   So he had a meeting with The Elders before he had a meeting with me about the iPad. So Richard's questions are more about, "what does this say about the Virgin brand, what does this mean for us?"  Not, "whats on page 36?"  He has people who do that for him.  And he has great people around him who work with us everyday.  And they're job is to protect what Virgin is, and help us to get the best out of it.  It's been a dream project, in that regard.

Richard Branson Challenges Rupert Murdoch To An iPad Duel, Would Have Been A Journalist