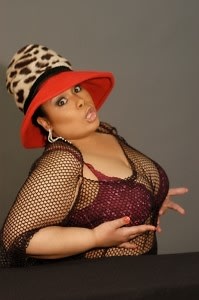 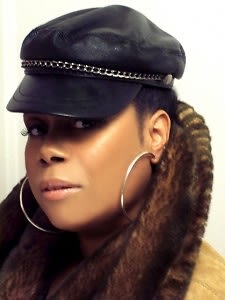 Comedian/Actress and New Yorker Robbyne Kaamil is not afraid to sit you down and tell you how it REALLY is. She stars in her own one woman show Raw & Real which explores the worlds of politics, racism, relationships, and sex with her "raunchy, over the top, in-your-face demeanor" like no one else. Raw & Real, which you can catch at The Crown & Anchor in Provincetown on October 11th-13th, also features excerpts from her controversial book, Get Off The Titty: Poetry That Bites and you have probably shaked it to her Dance-hits "Bitch Slap" and "Free To Love" at the club. This jack-of-all-trades diva also finds time to dish out advice on her website, CanWeBeReal and on DList.com.  She talks with us about her relationship with Howard Stern, what to do if you find porn on your boyfriend's computer, and why nothing is off limits on stage, in our funniest interview yet:

You talk about everything from politics to race to sex in your one-woman show "Raw & Real". Is there anything you consider off limits while on stage? There is nothing off limits when I’m on stage. The stage is about the only place left where you can tell the truth. All of our information is watered down and altered. Most people act like they’re walking on eggshells and have a problem speaking what’s on their mind. God forbid they say something deemed politically incorrect! Not me. I call a spade a spade and a rat a rat – on stage and off.

Have you ever been stumped with a question on your advice website Can We Be Real.com? No. I was raised in the South Bronx – Fort Apache. I’ve heard it all and seen it all. The problems people have are basically the same whether they live on Sutton Place or in Bed-Stuy. Everybody’s drama is about one of three things – love, sex or money - sometimes all three.

What's the craziest question you've ever had to answer? I had someone write me who was dating a guy he really liked but he found child pornography on the boyfriend’s computer. He wanted to know what he should do because he really liked this guy and wanted to build a future with him. I’m like bitch you need to be calling the FBI and the police! How can you consider having a future with someone who is molesting children?! I’m all for adults getting their freak on but don’t mess with the children!

What was your experience like on The Howard Stern Show? Howard and I got along very well. I thing he really respected that I kept it real. He’s very real too. He’s one of the few people I know who has the balls to speak his mind.

Who would win in a brawl between Howard Stern and drag queen diva Hedda Lettuce? Honey, that fight would be decided on points - no knockouts. Hedda and Howard are both fierce! There would definitely be a lot of blood and hair on the floor.

What is your favorite night spot in NYC and why? The one on the west side with the in-house drug dealer. I forgot the name of it. I like that I can get an a couple grams of candy there if my boy uptown is unavailable.

You've said "I must have been a drag queen in your past life." What would your drag queen name be and why? I think my drag name would be Cuntessa because the way I read people if I were a drag queen people would say I was cunty.

Who is your favorite NYC drag queen? I would have to say Ms. Hedda Lettuce. She is a class act and very gracious but she knows when to pull out a switchblade and cut a motherfucker down to size. Very much like myself.

What do you think about Sarah Palin? I respect any woman who is a working mother whether she is a vice-president nominee or a waitress working 10 hour days. Trying to balance it all is never easy. Ms. Sarah is not as tenacious as Hillary Clinton and there is a lot about her that is unknown. I strongly disagree with her stance on abortion. Forcing a victim of incest or a rape to carry a baby to full term is one of the most despicable things you can do to a young girl or woman. Taking away a woman’s right to choose would have devastating long term effects. When a woman decides to terminate a pregnancy she instinctively knows that it would not be good to bring that child into the world whether it is because the baby’s daddy ain’t shit, she can’t afford it or she knows she can’t give the child the love it needs. The world already has enough unloved and unwanted children who have grown up to be fucked up adults. We don’t need anymore. I would like to ask Ms. Sarah, who is going to take care of all these babies if there were a ban on abortion? Homeless shelters across the country are often having to turn away people, all government programs including rent subsidies like Section-8 which make affordable housing possible are being cut to the bone and don’t get me started on this current economic climate.

Does Ms. Sarah think that she can simply cook up a big pot of moose head soup on the Great Lawn every Sunday to feed everybody? I don’t think so.

What would your campaign be like if you were on the ticket as the first female Vice Presidential candidate? I wouldn’t last a week. They would take my ass out like they did JFK because I would be calling all of those shady motherfuckers on Capitol Hill on their shit. Washington is a very dirty town. People there will do anything to rise through the ranks and they all lie. Politics is like bare knuckle street fighting - everybody in the game has blood and dirt on their hands.

What is your most memorable "Bitch Slap" moment? I was shopping at a store on Fifth Avenue and this clerk started following me around like I came in there to snatch everything off the racks and run out. As a black girl I’m used to having a “second shadow” follow me when I go shopping but this bitch was really working my nerves. I was the only customer in the store. She should have been grateful I was there. I wanted to slap that dumb bitch so bad. But I didn’t because I’m a law abiding citizen and I can’t get no dick in jail.

If you could be on any reality tv show, which one would you choose? I would love to be on Survivor if the producers would let me bring along a bottle of Crisco and a frying pan. Some of those things they eat on the show (rats, lizards, bugs, etc) would taste so much better fried. I could be the new Rachel Ray.

Besides your own, which website do you visit daily? Perez Hilton’s website. I love the drama and dirt.

When you're not performing, writing, recording, or giving advice, what do you spend the majority of your time doing? That is what I do 24/7. Two years I left my day gig. I had to make a move. A 9-5 job can seem like a damn plantation when you’re trying to work on fulfilling your dream and Ms. Robbyne don’t pick no cotton!

Your show is coming up in Provincetown this month. Any warnings for the P-Towners who are seeing the show for the first time? I would advise them to take their medication. By the time I get off the stage they will all need to increase their dosage.

What words of wisdom do you have for other Bad-Ass Bitches out there? Keep It real. Sometimes that’s easier said than done. Being real is not always popular but I’ve learned that even when a motherfucker hates you for telling him the truth he will respect you for doing it.

Robbynne will be performing at The Crown & Anchor Oct. 11,12,13 in Provincetown, MA.