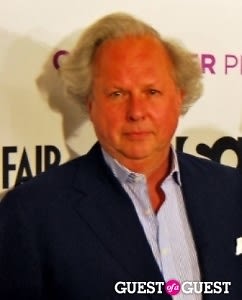 At the New York Landmarks Conservancy's 2010 Living Landmarks Celebration at the Plaza Hotel, we discovered Graydon Carter's optimistic take on the Republican domination of midterm elections and his hope for cigarettes.

Carter said that in light of the results, his buddies have been proposing escape routes into his native country.

"A lot of people were asking me, how do we get back, how they can get into Canada right now," he said.

But Carter found an optimistic kernel in the midst of the Democratic disappointment.

"In the last two years, it's the best thing that ever happened to Obama, because things will get even more screwed up over the next two years--he'll look like a savior."

Carter thinks that Obama will be able to shift blame on points of criticism to the Republicans; the GOP can now be scapegoated for any of the President's potential ineffectiveness.

The launch of whatthefuckhasobamadonesofar.com, a website that chronicles Obama's accomplishments, prompted us to ask whether he thought Obama has been an effective leader.

In 2003, Carter told The Financial Times,

"I don't vote. I find both parties to be appalling and OK at the same time. I find it harder for anybody as they get older to feel 100 per cent strongly behind one party. There's lots more gray than when I was younger. I'm a libertarian."

In something of a change from that disillusionment with the political, Carter did vote on Tuesday but naturally wasn't quite feeling the Jon Stewart love with regard to the Rally to Restore Sanity.

"No, that's a carnival show," he barked.

He then discussed his still-espoused libertarian views, which hinge around support for smoking--even at the restaurants he owns.

"I'm a libertarian on a lot of social issues," he said.  "Smoking. I don't smoke anymore, but I still think people should be allowed to smoke. I'd like people to be able to smoke at The Waverly Inn."