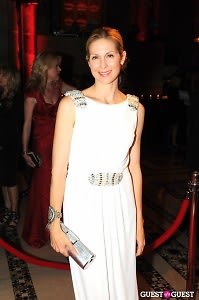 At the premiere of "Elf" last night at The Al Hirschfeld Theatre (yes, they've turned the Will Ferrell movie into a Broadway show), we spoke with Kelly Rutherford about the challenges of playing Lily van der Woodsen.

In order to immerse herself in the world of the hoity-toity character she plays, Rutherford said she can draw on ample material available in her own neighborhood and life:

"I mean, I live on the Upper East Side, so that makes it easy, and I have kind of on and off my whole life. And my mother and I are exactly the same age difference that Blake and I are. So that's really fun to pull from--kind of being on the other end of that."

Using the cloistered Upper East Side and her own relationship with her mother (model Ann Edwards) as a basis for relating to Blake Lively's Serena, Rutherford described the subtle nuances that complicate this ritzy part of town.

Creating a character that mingles that old-money establishment with a modern hipness or flair comes easily as she has tread deep into that world while maintaining some remove; though she went to Beverly Hills High School as a freshman and finished at Newport Beach High School, Rutherford's New York childhood offers its material:

"I went to Dalton when I was younger for summer school. But I have a lot of friends that went to all those schools, and they were all the Blair Waldorfs and the Serenas of the world, you know. So it's nice that, being an actress, I have a little bit of an outside perspective. I think it's easier to portray it sometimes."

Rutherford has found that she can bond with Lively as an on-screen mother-daughter pair through clothes:

"I'm always asking her what she's wearing, and she asks me what I'm wearing. We bond professionally, but we've found this place to be mother and daughter on the show."

Though the challenges of conservative parenting are ever-present in the spoiled existence of Gossip Girl characters, Rutherford points out that the unhinged instincts of Lively's character have an unexpected source.

"I think you realize that she probably gets it from her mother and her upbringing as much as anything," Rutherford said. "So I think she's sort of a reflection of Lily in a way. And Lily was very much a rebel when she was growing up, according to the story, so I think she understands Serena in a way that maybe other people wouldn't, you know in her upbringing, and her lifestyle."

One part of set life that Rutherford tries to maintain a little maternal distance from remains the intra-cast dating circuit. Are Blake Lively and Penn Badgley a unit?

"I don't know, you know," she said. "Everyone's kind of broken up, and gotten back together, and broken up, so I have no idea. I think I'm the last to know. I find out on the press line what's going on. Seriously, everyone acts so normal."

Though she plays the ultimate WASP on TV, in her own life with her two children, she's found a slight digression from that identity when at a Jewish bakery with her son:

"We went by William Greenberg, and we're looking at all the cookies and the candies, and we walked inside and he said, 'Mommy, I want that house.' I said, 'Did you want the Hannukah house?' He said, 'Yes.' I said, "All right, then we have to go home and look everything up, and we're going to learn about it." And so we did. I was like, 'We'll make this educational.'