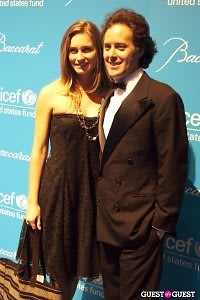 If they married, would her first and last name be the same? Given that her man is the son of Ralph Lauren, does she always have to wear that label out? We're not sure, but last night, she certainly went with a black RL number for her dress.

The press gaggle asked incessantly about her uncle's much talked-about memoir Decision Points,but she cleanly deflected all questions of the kind. Bush, a model and Princeton grad (and former member of Ivy, Princeton's most exclusive eating club), instead offered tips on how one can contribute to UNICEF (for example, by purchasing the snazzy Lord & Taylor bag she was sporting, for which a portion of the proceeds go to the organization) and answering questions about her new fashion line, "Lauren Pierce," something she seemed very excited about: for the line she has been working on a collaboration with Disney on their "Small World" launch, a line of luxury apparel based on the famous "It's a Small World" Disney ride and billed for the spring at Nordstom. Like her Lord & Taylor bag, part of the proceeds from this line will also go to charity.

She then ducked inside, where she caught up with her cousin Barbara Pierce Bush, the older of Dubya's fraternal twin daughters