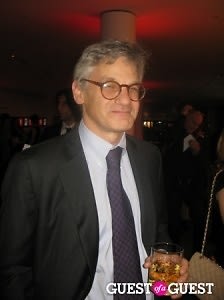 At MoMA for the 24th Annual FN Achievement Awards, the current editorial director of Fairchild Fashion Group (which puts Women's Wear Daily under his domain) spoke about the fast-changing pace of the journalistic output medium, with the press in a tizzy over Rupert Murdoch's The Daily and Richard Branson's iPad magazine, Project, which launched yesterday (see our interview with Branson here).

"I think it's the beginning of the new day," Kaplan said. "I think it's an amazing moment. Rupert [Murdoch] really is a visionary. I think it's gonna work. I think an iPad or a Tablet-focused newspaper is its own animal, and I think it's an incredible opening for the media. It's the best  merger of the old media and new media there could possibly be."

This trend in new media that mirrors Kaplan's own vision for his pursuits is a far cry from his days at the salmon-pink rag. The man, who has worn the same E..B. Meyrowitz tortoise-shell glasses for the last twenty years (exchanging them occasionally for a Purdy version) and who appears a sort of  model for Dr. T. J. Eckleburg, has a visionary gaze toward the future.

In continued adulation--that is really a sincere fascination with the tack-and-gybe dynamics of his field--had a boiler-plate assessment of Murdoch and Branson:

"These are two giants...they see things other people don't."

It's fascinating to speak to old-school journalists like Kaplan and David Remnick, of hard-nosed newspaper provenance, and hear either their measured acceptance or wild enthusiasm for new tech developments. Though Remnick has been rigorously working on The New Yorker's iPad app and recognizes its great potential, Kaplan was a smidge more vocally appreciative of the device--singing a mini paean to Steve Jobs. He imagines a WWD paid iPad app as a follow-up to the WWD Blast, a free and available iPad iteration of his paper.

"I think whatever we do this year is gonna be gangbusters, gonna to be wonderful," he said.

Though Branson had difficulty explaining the time-space continuum dilemma (he has a so called monthly magazine with minute by minute updates), Kaplan had no qualms about guessing as to the implementation.

"Well, you know: I can imagine how it would work," he said. "Think of a newspaper in which you come out every day, and the ideas, the news, and the headlines are stated once a day but you're doing constant later editions, constant updates, so in fact, you're right; you have your finger on it. There is a time-space continuum going on. It's actually, I think it's an appropriate use of the medium, and it's kind of the way I would use it also if I were doing a monthly or a weekly: I would state the case for that issue and then do a constant update of real time news."

But with all these changes and futuristic ventures, does he miss the Observer?

"It's not nostalgia," he said. "I dream about it. I miss it everyday, but it was a bubble in time. The thing you gotta get used to in the media is the fact that you only live in an ever-changing present. And so, nobody remembers yesterday's newspaper but the editor. So I miss it, but I'd be surprised if anybody else does."

Kaplan is nonetheless realistic about the musical chairs of editors and their journalistic armies--the inevitability of the juggle.

"I think of editors like movie directors," he said, "you know, and every editor gets to direct his own movie. You know, for fifteen years, I got to do mine. And they've got an excellent editor [Kyle Pope] who's getting to state his own case right now. And the staff moves in and out in the same way that, you know, a director gets to change out a screen writer and actors, reporters and artists move in and out with every editor."

You certainly can't fault Kaplan for diplomacy, as he went on to praise Pope's version of the paper.

"So I think what's happening with the New York Observer right now is appropriate for the moment. I think that Kyle Pope's doing a lovely version of the paper. And it's not what I would do, but every editor gets to have his own charge."

Sticks and stones may break bones, and anodyne articulateness will never hurt anyone: continuing in this vain, Kaplan praised Jared Kushner.

"Jared saved the New York Observer at a point when both a change in the media and the collapse of the economy could have killed  it, so I'm only grateful to Jared," he said, expressing approval of the profitable Commercial Observer and his Las Vegas paper, Vegas Seven.

And then out of the blue, Ivanka Trump appeared, and Kaplan said, "Did you bring my boy?" But alas, the answer was no: Trump flew solo last night and wrapped Kaplan up in a bit of polite banter.