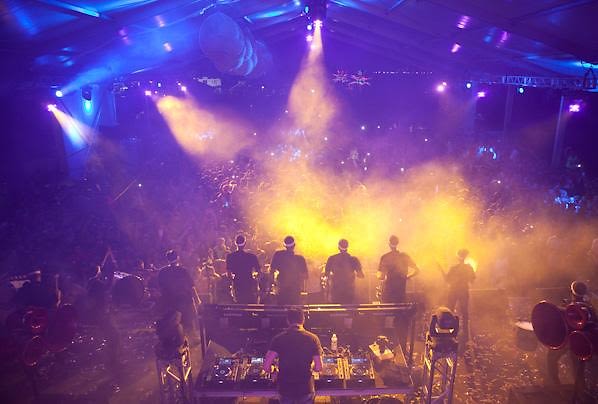 “Are you going to Thomas Gold?” she asks. She can’t be a day over 19 and she looks sorts of like a cross between a raver and wonder woman in her outfit. “Yes. Is it that obvious?” I’m on the 1 train and we’ve just pulled into the last stop, South Ferry. We head up the stairs towards the ferry station for Governors Island.

Some random 20 somethings ask me if I know where the ferry is. I point to the building with the big banner that say’s “Governors Island” and say “that’s a good place to start. Follow the Dayglo.”

There is a massive line of hundreds of young people stretching around the building. Most of them are donning crazy neon outfits that would probably give some young children a seizure. EDM related concerts are big business with today’s youth and their popularity is one of the main reasons why electronic music had finally infiltrated pop culture in a big way. 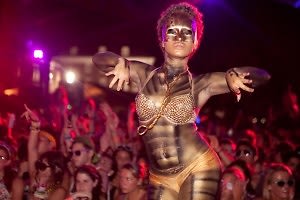 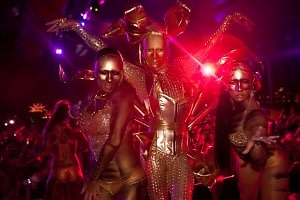 I walk past the massive line to the dismay of many attendees and approach the media/VIP check in. I see my friend a sales rep from “Red Bull” checking in at the same time. “Of course I’d find you on VIP line” I say. The girl at media check in gives me a press wristband that says “I’m the 1% tonight.”

I join my friends and we walk towards the front of the ferry line. The security guards are frustrated from the kids ignoring most of what they say. One threatens to throw one young girl off the line after she witnesses her ducking under a partition. Though her threat has no real bearing and the girl joins the rest of her friends after a brief shaming.

We hop on the upper tier of the ferry and grab a bench towards the back. It really could not be a nicer day for an outdoor concert, clear skies, and warm with a cool breeze. The ferry security guards announce, “There is no smoking on the ferry.” Much to the dismay of many party goers and make a few people put them out. 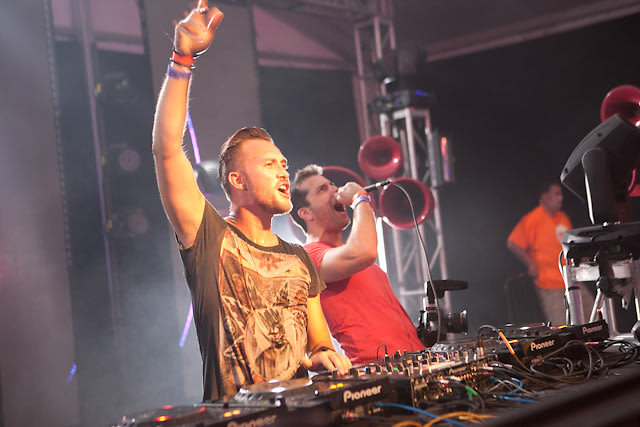 After a short pleasant ferry ride we arrive at Governors island. Check in is pretty smooth and we head to the bar to grab a drink. DJ Tim Mason is currently on the decks and the growing crowd seems pretty into it. We head over to the elevated VIP section and find a spot. It’s really early and the crowd has plenty of energy.

It’s time for my interview with French DJ Norman Doray who’s growing in popularity after releasing two huge tracks the past year “Trilogy” and “Chase the Sun.” He is currently signed to Steve Angello’s (of Swedish House Mafia) label “Size Records”

Haute Nights: Can you tell me a little bit a bout your background in the scene for those who might not be familiar with your music?

Norman Doray: My main influence is Disco music. My parents listened to that kind of music all their lives so I grew up with it. Then when I was a teenager I discovered French House music with Daft Punk and all these guys. It changed my life.

HT: So when did you first start DJing how did you get into it?

ND: I started when I was 16 years old at random bars. No one was there. It was really hard at first but it was a good way to start. You were learning how to mix and how to please the crowd. Looking back it was a great learning experience for me.

HT: How do you feel about EDM’s recent infiltration of pop culture as an artist?

ND: It’s crazy. To be honest I was not expecting it. No one was. It came so fast and was so big, especially in America. The music we were doing for years in Europe was big for the DJ scene but not the radio. Even in European radio there were very few options. American took it and made it completely different. Now thanks to you guys I’m playing everywhere around the US.

HN: How do you feel being cosigned by big artists like Steve Angello and Axwell have helped your development as a producer?

ND: It’s really good recognition. You always talk in the studio. You love these guys and admire their work. Then for them to let me be on their labels and release my tracks, you feel great. It inspires me to work harder because I want to make them proud.

HN: You have a couple of new tracks coming out .Can you tell me what went into producing “Celsius” and I also heard you have something brewing with Nervo?

ND: I’ve been close with Eddie Thoneick for years. We love the same music so we though we should do a track together. So we sat in the studio for 2-3 days on no sleep, just producing music. We did that track in one shot it was a great experience. 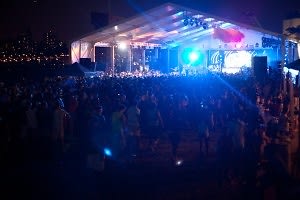 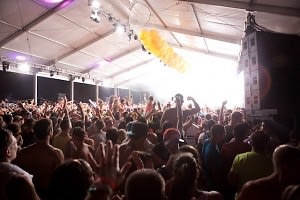 I met the girls of Nervo a couple years back and I loved the way they approached their music, they do everything. I wanted to work with them and the collaboration was amazing. It’s called “Something to Believe In” and it should be released mid September.

I thank Norman for his time and head back out to the show. The crowd has grown considerably. Luckily there are a lot of younger folk so the line for the bar isn’t that bad. I return to VIP and my friends have joined a table near the barricade.

The one thing about these crowds is most people are really friendly. Whether there is some other kind of influence that leads to this behavior or now, it is a welcome vibe from a nightlife scene in which people can be really obnoxious. Norman comes on to spin and does a great job with a high-energy set.

Next up is the featured performer Thomas Gold. At this point the crowd is at capacity and people are chanting his name. A full drum line comes out for a really cool opening. Thomas is revealed and the place goes nuts. Confetti falls from the ceiling and the light show begins along with his set.

I have been to a few of these events and the light shows and screens are so vital to the vibe. Really good presentation goes a long way with these crowds. He plays a good mix of tracks. Some a bit more commercial and obviously pandering to Americans. While others that a more seasoned EDM fan might dig.

I head out around 12 a half hour before his set is supposed to end to beat the rush for the ferry. There is still a pretty good line but we manage to maneuver our way to the front just as they start letting people on to the latest ferry. It was a great day for an outdoor concert. Now the only question left is.. should I go to 1OAK? I wonder if they’ll let me in with shorts on…

Sean is a blogger and nightlife promoter at various venues throughout the city.

Check out more of his articles and stories at www.hautenightlife.com Follow him on twitter @hautenights Email Sean: hautenightlife1@gmail.com