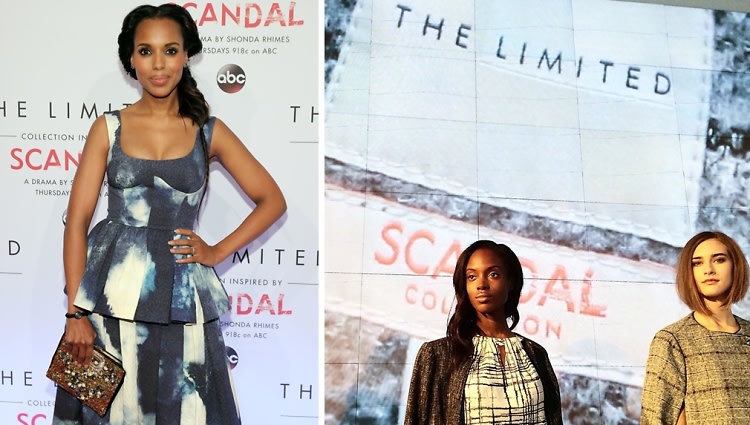 Last night, Kerry Washington, alongside costume designer Lyn Paolo and The Limited’s Elliot Staples, hosted a private event at the IAC Building in celebration of The Limited Collection Inspired by Scandal. The trio was all smiles as they talked about the collaboration. “It was amazingly smooth! The whole Limited team [were] so welcoming to us,” gushed Costume Designer Lyn Paolo. Washington agreed, “I love Lyn and Elliot, I just love being able to work with them! I’m usually so obsessive about details and this was an area in my life where that worked in my favor, so I was really excited about it!”

Washington's character is typically decked out in Alexander McQueen, Dior, and Valentino for the small screen. The trio worked hard to recreate Olivia Pope’s strong sense of style for mass market. “I would describe [Olivia Pope] as the modern day power dresser. We wanted to kind of re-envision the woman’s power suit because you don’t have to look like a man to be powerful. There’s a waist to these jackets, there’s peplums, there’s details, embellishments, buttons that are all very feminine,” explained Washington. Paolo added, “We really wanted [the line] to be soft and feminine at the same time.”

Models showcased the first collection by “a national retailer, a leading network show, its costume designer and lead lady.” Scenes from the campaign video were projected behind the models, creating a sort of “meta” effect. The collection spans tops, pants, jackets, and outerwear, all in a muted color palette. Standout pieces included a simple white column dress and an on-trend power coat in various colors. Washington chose to dress “out-of-character,” sporting a graphic Giles dress and Roger Vivier clutch. As partygoers snapped photos of the collection, Washington’s parents stood proudly on the sidelines of the IAC building lobby. The collection starts at $49 and will be available September 23rd at The Limited Stores nationwide.

Click through our slideshow for our exclusive interview with Kerry Washington and Lyn Paolo!