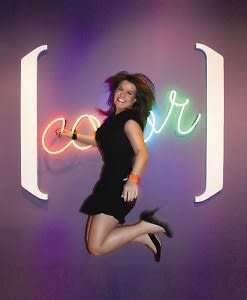 Spring in New York's Meatpacking District: Christian Louboutins are flashing their telltale red, tulips are blossoming on the High Line, and just below, a boutique shop called STORY is painted in a spectrum of color, with vibrant merchandise to match each hue. But if a visitor were to pass by a few weeks from now, they'd find a completely different store -- or so they'd think.

Founded last December by marketing consultant Rachel Shechtman, STORY is a very special kind of retail space. Every four to eight weeks, the store is completely renovated -- its walls, decor, and merchandise are changed to reflect a new theme. Currently, that theme is "Color," but before March 28, it was "Love," a nod to the romance of Valentine's Day.

"STORY is a space that has the point of view of a magazine, but changes like a gallery and sells things like a store," explained Ms. Shechtman, whose past consulting clients include Gilt Groupe and Lord & Taylor. "Come here in February, then come here in May--you'd think it's two different stores. We're using retail as an opportunity to tell stories, but also to create a sense of community and entertainment." 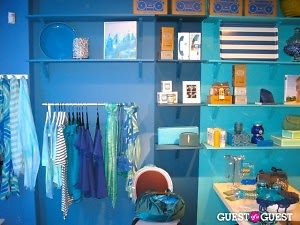 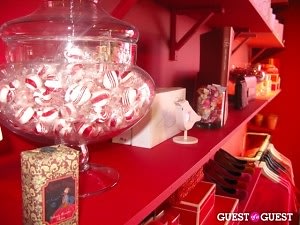 Book readings, fashion events, and even impromptu mimosa parties were among the recent activities hosted by STORY, which also offers workshops modeled, in part, after Apple stores.  But whereas Apple might help customers with technical difficulties, STORY offers a more visceral kind of troubleshooting. Last week, Benjamin Moore held a skill-share session that discussed the impact of wall color on moodswings. And in February, Nerve.com offered love advice and free online dating sessions to New York's lonely hearts. Said Shechtman:

"This isn't just about shopping... You can attend classes. You can learn something. I think that's critical."

Having advertising partners such as Benjamin Moore and Nerve.com also make STORY unique in the brick-and-mortar retail world. "They're experts in their fields -- they add credibility to what we're doing," said Shechtman. "There's advertising on billboards, on websites, so why not in a store?" Since themes are influenced by partnerships, it should come as no surprise to find a Benjamin Moore representative advising on color schemes, or a few swatches tucked among the merchandise. 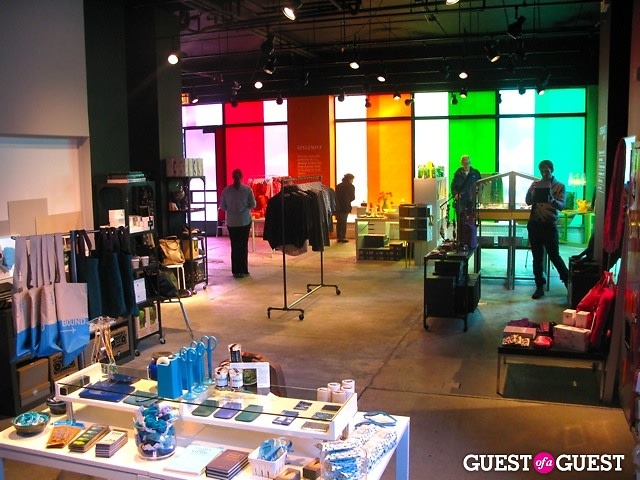 About that merchandise. For its current "Color" edition, STORY has partnered with three online start-ups -- BaubleBar, CHROMATICgallerie, and the Olsen twins' label, StyleMint -- along with many others to display over 1,000 items.  Many of these products, including fashion designs by the Olsens, were formerly only viewable on the internet.

"This is the only place you can look at these items in real life," said Shechtman. 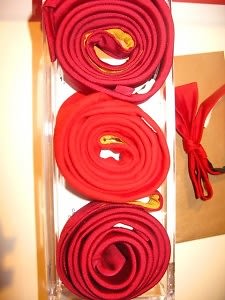 Keeping with the current theme of "Color," the store's interior walls have been painted as a changing color wheel, with products and decor arranged in front of their corresponding shade. In the red section, for example, a pink orchid is perched near ruby CHROMATIC heels, a jar of peppermints, and a set of ties rolled up to resemble roses. Meanwhile, in the green corner, chartreuse purses are draped on a chair, and a row of olive bracelets snake their way to an insect encyclopedia with a grasshopper printed on the cover.

"Everyone," said Ms. Shechtman. "Whether you're 10 years old or 70, whether you want to spend $10 or $600... One of my best customers is Bella, a 9-year-old that comes every week or so. This is about creating an experience that relates to a wide range of people."

As if to prove her point, a girl behind her began to crayon in a large coloring book, while the child's mother tried on a bracelet beaded with silver skulls. While the store features many women's accessories such as purses, blouses and jewelry, there's enough variety to entice a range of customers. Speakers and mp3 players, bars of dark chocolate, stuffed animals, iPad sleeves, cheese straws, and eco-friendly chopsticks were among the eclectic items scattered throughout STORY.

Perhaps to coincide with the storytelling theme, there are also quite a few books on display, including a biography of Abraham Lincoln, a French cookbook, Tiffany's Table Manners For Teenagers, and a gem called Aqua Erotica, a self-described "waterproof" novel that's "so unforgetably sexy you'll want to take it with you to the bath, the sauna, the night-lit pool." 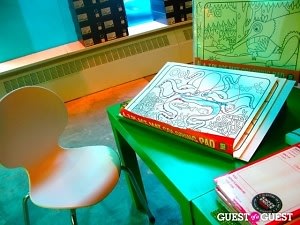 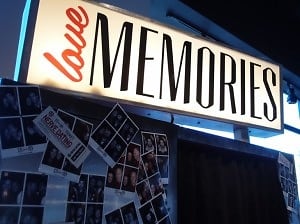 Even four-legged friends can find a place at STORY. At one point, a man walked in with a leashed Cavalier King Charles Spaniel, and inquired if he could take a picture with his dog in the store's photo booth. "Dogs are always welcome," said Ms. Shechtman, ushering the pair in while offering the dog a biscuit from the large jar by the window. The photo booth is a popular attraction at STORY, particularly when it doubled as a kissing booth during the "Love" theme.

"Our role is to play matchmaker between brands and consumers," said Shechtman. "In that sense, we're a dating service."

Love. Color. What chapter can we expect next in this STORY?

"You'll just have to wait and find out." 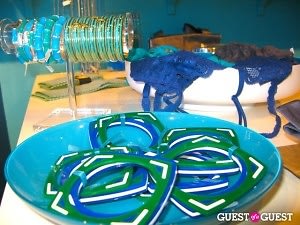 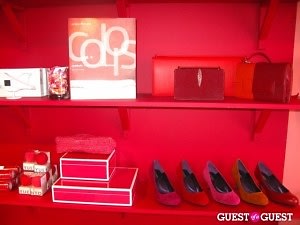 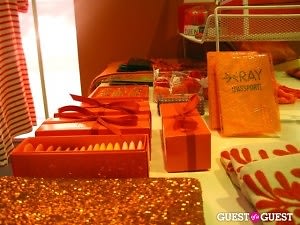 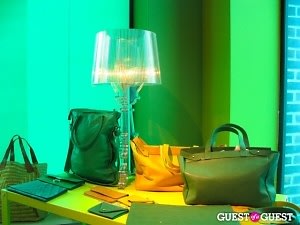 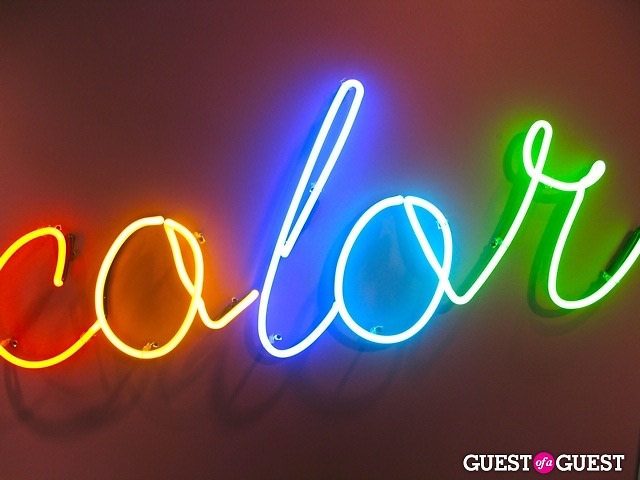 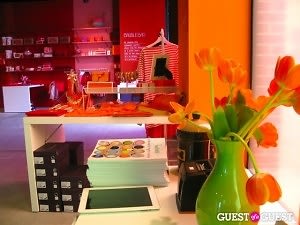 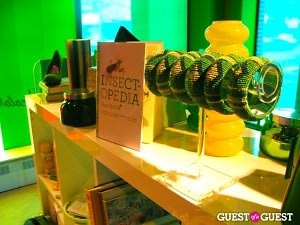 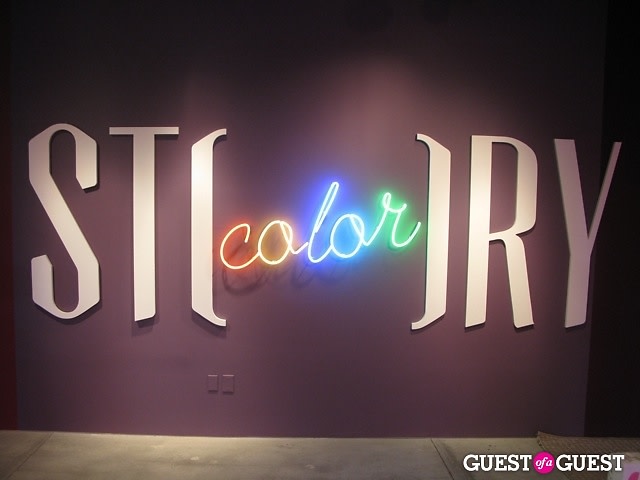